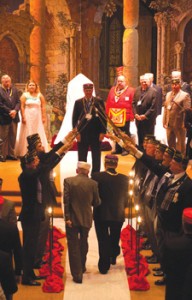 Ill. Douglas Adkins, 33°, SGIG in Texas, welcomes a distinguished guest.
On July 31 and August 1 the Scottish Rite Masons of Texas assembled in the Lee Lockwood Scottish Rite Library and Museum in Waco for the 2010 State-Wide Philip Crosby Tucker Legacy Scottish Rite Convocation. Ill. Tucker was SGIG in Texas, 1868–93, and SGC, 1893–94. There are more Scottish Rite Masons—27,000—in the nine Valleys of the Texas than in any other state in the SJ or NMJ, and 17,000 of them live within 150 miles of Waco. Planners for this first-ever all-Texas convocation hoped for 75 attendees; final attendance was 180, continuing the Texas tradition of doing everything in a big way!