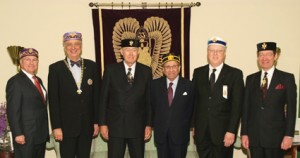 Left to Right: Ill. Leonard Proden, 33°, SGIG in D.C.; Ill. Ronald A. Seale, 33°, SGC; Ill. John L. W. Wright, 33°, SGC for England and Wales; Bro. Roeinton B. Khambatta, 32°; Ill. S. Brent Morris, 33°, Grand Cross; and Ill. Robin E. Furber, 33°, Grand Secretary General for England and Wales.
The 32° was conferred on Dr. Roeinton B. Khambatta of London, England, in the Valley of Washington, D.C., on May 20, 2010. The mandatory degrees were presented in a special form interspersed with a narrative communication of the other degrees. The Supreme Council for England and Wales graciously permitted Dr. Khambatta to join the Orient of D.C., and to show their support for Bro. Khambatta’s advancement, Dr. John Wright, 33°, Sovereign Grand Commander, and Ill. Robin Furber, 33°, Grand Secretary General, attended the ceremony. Dr. Khambatta is a retired consulting cardiologist, a Fellow of the Royal College of Physicians of London and Edinburgh, and an Emeritus Fellow of the American College of Cardiology and also of the American College of Chest Physicians. He is Past District Grand Master of Pakistan for UGLE and in 2001 was Worshipful Master of Quatuor Coronati Lodge No. 2076, the premier lodge of Masonic research. Dr. Khambatta was appointed by the Board of General Purposes of the United Grand Lodge of England as the 2007 Prestonian Lecturer. In this capacity he traveled at his own expense to Washington and gave his lecture at the House of the Temple for the benefit of the Scottish Rite Foundation.