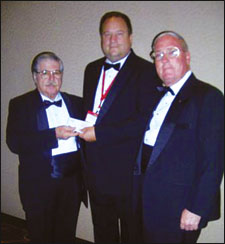 The Valley of Seoul, Korea, has pledged $10,000 to the House of the Temple’s Rebuilding the Temple Campaign, making them the first valley outside of the continental U.S. to make a pledge! During the Biennial Session in Washington, D.C., this past August, Ill. William M. Alexander, 33°, Secretary of the Valley of Seoul, Korea, presented a check for $1,911 to commemorate the year the cornerstone was laid for the House of the Temple. This check is the first payment of their pledge—and doesn’t come from valley resources. Several Seoul brothers generously agreed to make the $10,000 contribution themselves on behalf of the Valley. They challenge other valleys to achieve the average giving thus far achieved by the 119 members in the Valley of Seoul: $84 each!