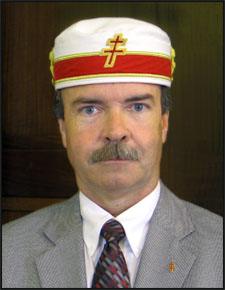 SGC Ronald A. Seale, 33°, has appointed Ill. Keith Lundy, 33°, as Deputy of the Supreme Council in the Orient of Mississippi replacing Ill. Howard E. Kerce, 33°, SGIG in Mississippi, who has retired. Ill. Lundy was born on November 29, 1959, in Prentiss, Mississippi, and after high school attended the Dallas Institute of Mortuary Science, where he graduated with a Bachelor’s Degree in Mortuary Science and Administration in 1981. He currently holds a managing position at the Pioneer Credit Company in Monticello, Mississippi. Bro. Lundy served as a Board Member (1994–2007) and President of the Board of Trustees (2002–2007) of the Covington County Hospital in Collins, Mississippi. He and his wife Debbie have one daughter, Kayla.

Bro. Keith is an active member of many Masonic orders including the Hattiesburg and Jackson Scottish Rite Bodies, and he is an Honorary Member of the Corinth Scottish Rite Bodies. In 1993 he received the rank and decoration of a Knight Commander of the Court of Honour and in 2003 was coroneted a 33° Inspector General Honorary.

Ill. Lundy served as Grand Commander of the KCCH Investiture Team in Mississippi in 2005 and has since held the position of Special Assistant to the SGIG in Mississippi. He is also currently the Sr. Warden of the Actual Past Masters Degree Team at the Grand Lodge of Mississippi. Bro. Lundy has had the solemn privilege of conferring 69 Masonic Funerals.
—By Lauren Buonaugurio