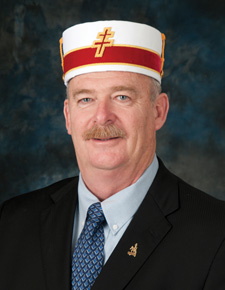 SGC Ronald A. Seale, 33°, has appointed MW John L. Farmer, 33°, as Deputy of the Supreme Council in the Orient of Wyoming replacing Ill. Robert W. Schrader, 33°. Ill. Farmer was born in Asheville, North Carolina on August 30, 1950, and served in the United States Air Force for 27 years, retiring as Chief Master Sergeant in the duty position of Maintenance Superintendent for the 20th Air Force. He holds a Bachelor of Science Degree in Management Human Resources and an Associate of Applied Science Degree in Electronic Systems Technology. He and his wife Janet have four children: Sarah, Abigail, Marcus, and Matthew. Matthew and his wife, Janice, have a son, Bro. Farmer’s grandson, Isaac.

Bro. John is active in many Masonic orders. He is a Past President of Cheyenne Chapter No. 5, National Sojourners; Past Commander of Alexander Hamilton Camp No. 5, Heroes of ’76, past presiding officer of all York Rite bodies, a member of the Knights of the York Cross of Honour, in the progressive line of the Grand Chapter Royal Arch Masons of Wyoming, a member of the York Rite College, the Holy Royal Arch Knight Templar Priests, the Red Cross of Constantine, the Knight Masons of America, the Shriners, and many others.

MW Farmer became a 32° Master of the Royal Secret in 1999, received the rank and decoration of a Knight Commander of the Court of Honour in 2003, and was coroneted a 33° Inspector General Honorary in 2009. He was a charter member of the Knights of St. Andrew in Cheyenne, serves in the cast for the 4°, 14°, 15°, 29°, 32°, and Ceremony of Remembrance and Renewal, is director of the 15°, and co-director of the 32°. Before being appointed Deputy of the Supreme Council, Ill. Farmer served on the Deputy’s Advisory Council for the Valley of Cheyenne.