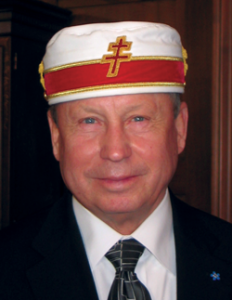 SGC Ronald A. Seale, 33°, has appointed MW James A. Smith, 33°, as Deputy of the Supreme Council in the Orient of Alabama following the retirement of Ill. Karl F. Reed II, 33°, SGIG in Alabama. Ill. Smith was born on June 28, 1941 in Chickasha, Oklahoma, to Arthur Lindsey and Stella Lee (Wade) Smith. After graduating from Ozark (now Carroll) High School in 1959, Bro. Jamie attended Troy State Teachers’ College for a short time before going to work with various contractors at Ft. Rucker, Alabama. He finished his college career in 1974, graduating from Troy State University and being named to Who’s Who Among Students in American Universities and Colleges. He retired from Ft. Rucker contract work in 2004.

Bro. Jamie married Betty McFadden on November 6, 1965; they have three children, Leslie, Brian, and Jason, and four grandchildren. Ill. Smith is a member of First United Methodist Church in Ozark where he serves on the Administrative Board, as a member of the Men’s Club, and as a sound system operator.

MW Smith is a member of Claybank Lodge No. 908, in Ozark and Harmony Lodge No. 46 in Eufaula. He became a Master Mason at Claybank Lodge in 1971 and served as Worshipful Master in 1975–76. He belongs to both the Scottish Rite and York Rite Bodies in Dothan. He was invested with the rank and decoration of a Knight Commander of the Court of Honour in 1995 and coroneted a 33° Inspector General Honorary in 1999. MW Smith was elected to the office of Junior Grand Warden in 2003, progressed through the grand line, and was installed Grand Master of Free and Accepted Masons of the state of Alabama on November 22, 2006.

Ill. Smith became a Knight of the York Cross of Honor in 2003, was elected Most Illustrious Grand Master of the Council of R.&S.M. of Alabama in 2010, and also received the Order of the Purple Cross in 2010. He is currently serving as the Grand Standard Bearer of the Grand Commandery of Knights Templar of Alabama.