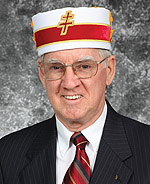 SGC Ronald A. Seale, 33°, has appointed Ill. Dale Irvin Goehrig, 33°, Deputy of the Supreme Council for the Orient of Florida. Bro. Dale was born in Washington, D.C., on November 5, 1938, and grew up in Maryland, Pennsylvania, Florida, and New Jersey. He served three years in the US Air Force Security Service and has an associate’s degree from Ocean County College, N.J., and a bachelor’s degree from the University of Miami, Coral Gables, Florida. He spent 10 years in the marine industry followed by 30 years in real estate and real estate finance before retiring in 2006. Ill. Goehrig has been active in his churches, serving on finance committees, as Sunday School superintendent, and as an elder. He and Rebba, his wife of 28 years, have three sons and four grandchildren.

Bro. Dale was raised a Master Mason in Harmony Lodge No. 18 in Toms River, N.J., in 1966, and then moved his primary membership to Coconut Grove Lodge No. 258, where he served as Master in 1978 and 1987 and Secretary 1991–98. He is also a member of Clermont Lodge No. 226, Florida. He was appointed District Deputy Grand Master in 1982, the first of 20 grand lodge positions which culminated in his election as Grand Master of the Grand Lodge of Florida in May 2009.

Ill. Goehrig became a 32° Master of the Royal Secret in Miami in 1977, received the rank and decoration of a Knight Commander of the Court of Honour in 1981, and was coroneted a 33° Inspector General Honorary in 1993. He has served as the head of all four bodies, degree master, and chairman of the sound committee.

Bro. Dale served twice as Worthy Patron of Temple Chapter, O.E.S., and is currently an officer of Clermont Chapter. He also belongs to the Miami York Rite bodies, the Red Cross of Constantine, Bahia Shriners, Mi-Am-I Grotto, and the Royal Order of Scotland.