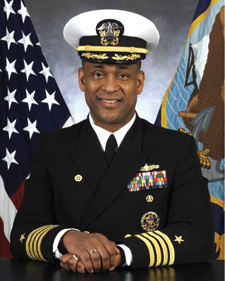 In March 2010, Capt. Charles L. Stuppard, 32°, relieved Capt. William W. Crow as Commanding Officer of Joint Expeditionary Base Little Creek-Fort Story, the first Joint Base established in Hampton Roads, Virginia. Bro. Stuppard reports to the Joint Expeditionary Base following a tour as Executive Assistant to the Commander of Navy Installations Command at the Washington Navy Yard.

Bro. Stuppard is a member of Naval Lodge No. 4, District of Columbia, and the Valley of Washington, D.C. Born in St-Marc, Haiti, he graduated from Cornell University with a degree in Mechanical and Aerospace Engineering in 1982. He then worked at Fairchild Republic Corporation as a Design Engineer in Weapon Systems and joined the Navy in 1985 as an aviation officer candidate. After commissioning and flight training, he switched to the Surface Warfare community.

His shore duty assignments include: student at the Naval War College in Newport, R.I., where he earned a Masters in National Security and Strategic Studies; Armed Forces Staff College in Norfolk, Va.; the Pentagon where he was designated a Joint Staff Officer and was serving at the Pentagon during 9/11; Command Leadership School in Newport where he served as a PCO/PXO leadership instructor. He also served a one year Individual Augmentee tour in Kuwait from May 2007–June 2008 as Commander of Task Group 56.6 caring for a force of 10,000 Sailors serving as Navy Individual Augmentees in Kuwait, Iraq and Afghanistan. His most recent shore tour was as Executive Assistant to the Commander of Navy Installations Command at the Washington Navy Yard. Captain Stuppard is a Doctoral Candidate at Salve Regina University in Newport and is currently writing his dissertation on “Leadership of a large, complex organization in times of crisis.”