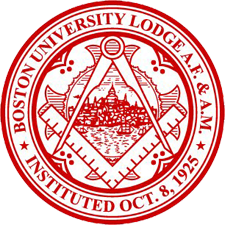 The Boston University Lodge A.F.&A.M. was constituted on September 26, 1925. The Lodge thrived throughout the first half of the 20th century, with a membership that included: Brother, University President, and Reverend Daniel P. Marsh; many of the School and College Deans; members of the faculty and staff; and, both undergraduate and graduate students. In the 1970s the lodge began to decline in popularity and failed to bring in new members. Subsequently, the Lodge was forced to give up its charter in the fall of 1999.

A committee of Masons with an affiliation to Boston University, including a number of previous BU Lodge members, is revitalizing the lodge in hopes to re-obtain its charter. For the past two years they have been organizing the effort and have since met the requirements set by the Grand Lodge of Massachusetts to petition to be reconstituted. The petition was submitted in early February and the reconstitution ceremony will take place later this year with an initial membership of over 35 men.

If you are interested in becoming a member and/or making a contribution to the Lodge, please contact the secretary@bulodge.org or at 617-398-0897. Please note that in order to be eligible for membership, per the Lodge’s by-laws, you must have attended, graduated from, or worked at Boston University for a period of six months or more.

Lastly, if you are interested in attending the ceremony, tickets will be available in a few months when exact details have been determined. Tickets will be sold (regardless of eligibility for membership) in order to raise funds for the Lodge. If interested, please contact the secretary with the best phone number, email address, and mailing address where you can be reached. The lodge can also be found on the web: www.bulodge.org.