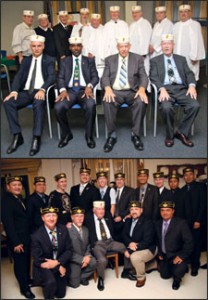 The American Military Scottish Rite Bodies, Europe, held a reunion and honors ceremony on October 7–8, 2011 in Vicenza, Italy, hosted by Ill. Johnny Ledford, 33°, Pisa, Italy. Nine brothers received the rank and decoration of a Knight Commander of the Court of Honour, four were coroneted Inspectors General Honorary, one received his blue cap in recognition of 50 years of faithful membership to the Scottish Rite, and fifteen new Masters of the Royal Secret were welcomed into the Valley. There were 106 guests at the banquet with members from USA, Germany, England, Holland, Netherlands, Belgium, and Italy. After the banquet, new members formally received their 32° black caps and a substantial contribution was raised for the Rebuilding the Temple Campaign, making this the second valley contribution from outside the continental US. The next Scottish Rite class to be conducted in Italy will be in Pisa 5–6 October 2012.