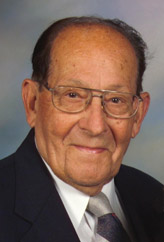 Ill. Aemil Pouler, 33°, Grand Cross, former Managing Editor of The New Age magazine, passed away on September 27, 2009. Born in Istanbul, Turkey, in 1916, Ill. Pouler graduated from the Theological School of Halki and Bayazit University. In 1942 he was the priest for Saint George Greek Orthodox Cathedral in Greenville, South Carolina, and oversaw the construction of a new church. He was a member of Recovery Lodge No. 31 in Greenville and joined the Greenville Scottish Rite Bodies in 1944. By 1961 he was in Washington, D.C., working on the staff of The New Age magazine (former name of The Scottish Rite Journal). In 1970 he became Managing Editor and continued in that position until 1986 when he became Grand Archivist. He was succeeded as Managing Editor by his son, Ill. Chris Pouler, 33°.

Bro. Pouler was a member of the Society of Indexers, England, and the Society of American Archivists and put these skills to great use indexing the Transactions from 1857, The New Age from 1904, various Supreme Council publications and organizing the Supreme Council archives. He received the KCCH in 1961, the 33° in 1965, the Grand Cross in 1973, and the DeMolay Legion of Honor in 1984.

More than these honors, he was a kind and generous man. As a very new 32° Mason I visited Ill. Pouler at the House of the Temple and told him about my current research project. He treated me with courtesy and respect and acted as if my visit was the most important activity he had that day. He loaned me a book from his personal library and said he trusted me to return it. Little did I expect that I would have his position some 25 years later. I have strived to achieve the same level of courtesy, respect, and generosity that he showed me.