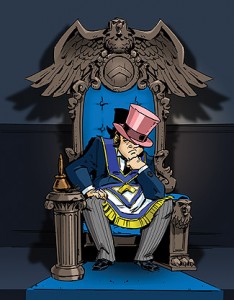 I was halfway to Lodge last night when I realized that I had forgotten my hat again. As a general rule, I dislike hats, and so despite my best intentions to go to Lodge fully dressed, my absentmindedness combines with my prejudice, producing the result that I invariably arrive bareheaded.

By the time I had assumed my customary seat in the back row, I’d forgotten all about it—tonight was election night. Not that my ambitions lead in that direction. I’d worn the jewel of the J.W. once, a few years ago when Old Higgins passed away and left the chair vacant. Just to help out, I’d agreed to stand for a special election although I wasn’t

I was still occupying a back-bench seat last evening, when to my surprise, our S.W. Dix announced that he could not accept an elevation to the East, citing other duties that would necessarily interfere—he having recently accepted a promotion at his bank. Ferris, the J.W., looked flummoxed at this but said nothing—he hadn’t attended regularly this year, and it seemed he’d hoped for another year and a few more openings and closings before he occupied Solomon’s chair. Still, when the ballots were passed around, I dutifully wrote in his name for W.M., but then scratched it out and voted for Crofoot, who was even less inclined to seek high office than myself if such a thing were possible and sat back to watch the count. With the Deacons calling out the names, the Secretary announced the results.

“Reginald Ferris,” the S.D. said, reading the name written on the paper ballot.

“Ferris: one,” the secretary intoned, writing the count on his blotter.

I glanced over to Crofoot to take in his consternation when I heard the unthinkable: “Hiram Brother.”

“Brother: one.” Crofoot met my glance with a wry smile, which shortly turned to mild surprise on hearing, “Brother: two.”

I looked about to see who else might be in on the joke, but I spied no other likely candidates. In short order, Ferris picked up three more votes, Watts, a past-master of many years, got an inevitable vote (some wag writes in his name for every office every year), someone voted for Grimsley who wasn’t even there, and four more votes came in for me. Ferris, at the last, picked up one final vote.

A tie, by thunder!

Undoubtedly, the universal prohibition against alcohol in the Lodge Hall was intended for just these situations—because anywhere else I would have belted down a double brandy and bolted for the door. As it was, I opted to try to talk my way out of it.

“Worshipful Master,” I said “I would be delighted to serve the lodge in any capacity, but I have never been elected to Senior Warden—I could not possibly serve in the East.”

At this, Crofoot rot him jumped up like a shot and reminded the lodge that I had been voted in previously as a Junior Warden, and thus being eligible to serve, called on the lodge to elect me. I shot daggers at him, but he affected not to notice. Then, Ferris stood up and deferred to me, saying he would be honored to serve as Senior Warden, and that sealed my doom. Out of options, I just tried to look particularly surly and unfit for even the most mundane responsibilities, but it was not to be. On the second ballot, I swept the field by a clear majority, and the WM inquired if I would accept. There was nothing for it but to rise, stammer out something graceful, and be seated with alacrity before the applause died out.

Crofoot damn his eyes shook my hand like the town pump.

“Congratulations, old boy,” he whispered, “I hope you didn’t forget your hat.”

He was alluding to the fact that our installation occurs immediately following elections, and for once, my hat was de rigueur. This meant only one thing—that I would be obliged to make use of the execrable loaner hat we always kept on hand just in case: the Helm of Hades, so called because it was Brobdingnagian—a size 9¼ at least—and fell to the bridge of the nose of everyone who wore it, making the entire lodge invisible.1 Moreover, it sat unused (until called for) on the Secretary’s desk for at least a decade holding letters, so although at one time it had been an ordinary black silk top hat, it had faded over the years to a disagreeable shade of reddish brown, which, in a certain light, could be construed as blush coral fuchsia rose roseate salmon pink.

So, on being escorted to the center of the Lodge by the S.D., I reluctantly passed the word for the Helm and another double brandy and upon its receipt, I took the oath that all Masters have taken before me. Even for a country lodge, there was still a great deal of ceremony, with salutes and glad handing and all that, but when they handed me the gavel—and invited me to put on that wretched hat—it struck me:

Everything looks a great deal different facing West in a lodge, especially when peering out from under the brim of a gigantic pinkish top hat.