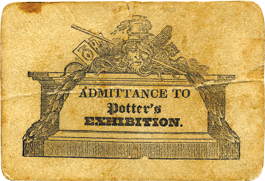 Photo: The only known ticket to one of Richard Potter’s performances. (Courtesy Mike Caveny)

Bro. Richard Potter was the first professional American-born magician and is also credited with being our first successful ventriloquist. His fame was such that the town of Potter Place, New Hampshire, still carries his name. His tricks included dipping his hands into molten lead, crawling through solid logs, and causing men’s hats to speak. Perhaps one of his most famous feats was dancing on a pile of eggs without cracking a single shell.

In November 1811, he joined African Lodge No. 459 of Boston under the premier Grand Lodge of England (Moderns). Richard Potter is named in the June 18, 1827, “Declaration of Independence” of African Lodge as one of three Royal Arch Masons to whom the three signing Past Masters of the lodge delivered the “Grand Charter.” This is the document that created Prince Hall Masonry.

Richard Potter was also among the signers of a petition to the United Grand Lodge of England, dated January 5, 1824, asking for authority to confer “the other four degrees.” Presumably this was the four degrees conferred in an American Chapter of Royal Arch Masons: Mark Master, Past Master, Most Excellent Master, and Royal Arch. A portion of their petition reads:

This Warrant allowing us to confer but the three Degrees, and Finding it injurious for the benefit of our Body by having no legal authority to confer the other four degrees. And understanding that the seven degrees is given under the Warrants from the Grand Lodge, We, therefore, humbly solicit the Renual of our Charter to ourtherise us Legally to confer the same, as we are now getting in a flourishing condition.1

What the brothers in African Lodge didn’t realize is that England organizes its degrees completely differently. While the Royal Arch is intimately connected with the Grand Lodge, the Mark is completely independent of the Craft and the Royal Arch, and they do not have the virtual Past Master or Most Excellent Master Degrees. The United Grand Lodge of England did not reply, but they have no records of receiving this or other correspondence known to have been sent from African Lodge. Communications were erratic at best during the early days of Masonry.

Richard Potter was born in 1783 in Hopkinton, Massachusetts, and his mother was a slave named Dinah owned by Sir Charles Frankland, a pre-Boston-Tea-Party tax collector of the Port of Boston. Richard Potter’s paternity was never established, but he was raised by Sir Charles. It is thought that Potter’s father was Frankland’s son.2

At the age of ten, he traveled to Britain as a cabin boy with a friend of the family, Captain Skinner. While in England, he decided that a life at sea was not for him and went on his own. He supposedly saw John Rannie, a magician and ventriloquist, perform at an English fair, and soon thereafter he began touring Britain and Europe with Rannie as his assistant. About 1800 Rannie and Potter came to the United States and joined a travelling circus.3

A year later John Rannie’s younger brother, James, came to America, and John started performing as “Rannie the Elder” with Potter still as his assistant. On March 25, 1808, Richard married Sally Harris, a Penobscot Indian, and the next year their son was born. In early 1811 John Rannie returned home to Scotland, but left Bro. Potter with an amazing knowledge of magic and ventriloquism. On November 3, 1811, Potter started his own career at the Exchange Coffee House in Boston with his Sally as his assistant. His performances were mostly at the Columbia Museum and featured ventriloquism, which was still considered a ground-breaking form of entertainment. His shows were labeled as “one hundred curious experiments with money, eggs, cards and the like.”4 It was December 3, 1811, that he became an English Mason when he joined African Lodge No. 459, still operating under its English charter.
Because of his dark complexion, Potter was often thought to be an American Indian or Hindu, all of which added to his air of mystery. He was described in advertisements as a “Black Yankee”. He sometimes dressed in a turban and performed as an Asian or introduced his wife (accurately) as an American Indian. Potter took full advantage of his perceived exotic appearance and fueled the mystery over the origin of his birth by claiming to be the son of Benjamin Franklin. (Although Bro. Franklin was known to be quite the ladies’ man, he was out of the country at the time of Potter’s conception.)5

Magic acts performed by Asians and Africans were successful because of the lingering belief of the public in “real magic” from mystical and exotic parts of the earth. Potter, the consummate showman, took advantage of these folk beliefs and gave his audiences what they wanted—mystery, exoticism, and a smashing good show. In 1817, during the depression of 1815–20, he was confident enough to increase his admission to a dollar, at a time when an unskilled laborer earned about fifty cents per day!6

While he performed primarily in New England, Potter and his wife played most of the United States. In Mobile, Alabama, he was refused space at an inn because of his race. Despite his run-in with prejudice during his stop, he made $4,800—about $55,500 today! Not feeling safe with that much money, he left the city in the middle of the night in the opposite direction of his next venue.7 Nonetheless, based on his profits, his visit must count as a financial success.

Bro. Richard Potter faced adversity throughout his life, but he ultimately triumphed. It’s easy to image him entering a tavern or theater through the front door and asking for the owner to arrange a performance. Given the racial prejudice of the times, he was probably only minutes away from being escorted out the back door when he did something to catch the owner’s attention. Perhaps he caused a teapot to start talking to the owner or perhaps a chicken appeared from underneath a table cloth. Whatever it was, the owner’s eyes went wide and he saw only one color—the green of the dollars that would come in.

Bro. Potter laid down his working tools on September 20, 1835, at age fifty-two. His wife Sally died a year later at age forty-nine. They were buried in front of their house and his stone is inscribed, “In memory of Richard Potter, the Celebrated Ventriloquist.”8 After his death, his son, Richard Potter, Jr., continued his father’s profession, although unsuccessfully.9 The Manchester, New Hampshire, “Ring” of the International Brotherhood of Magicians is named in honor of Potter: Black Richard Ring No. 166. And as an even greater testament to his fame and reputation, Potter Place, New Hampshire, commemorates America’s first native-born magician, surely the first and probably the only American town named after an African-American.