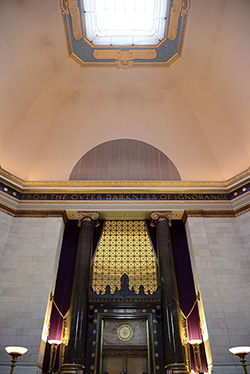 POSSIBLY! Chemical analysis performed on paint samples taken from the ceiling have revealed the existence of blue pigment. This lends credibility to the belief held by some Team members that the Temple Room might have had a starry sky canopy, a design theme that appears in some other Scottish Rite temples. The Temple’s ceiling currently is covered in canvas cloth and drywall mud and apparently has been so since a fire in 1956 damaged a portion of the dome (see photo at right).
I have read and agree to the Terms of Use and Privacy Policy.
I Agree