This original stone from the White House currently resides our Americanism Museum.

Not long after World War II, Ill. Harry S. Truman, the 33rd U.S. president and a 33rd Degree Scottish Rite Mason, expressed concerns regarding the structural integrity of the White House, a sentiment echoed by others who “said the White House was standing only from the force of habit.”* An extensive renovation project followed, which lasted from 1948 to 1952. 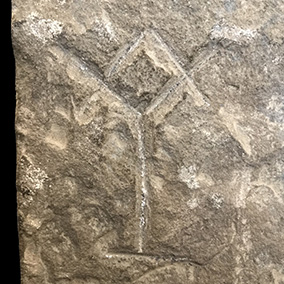 During an inspection of the work site, Ill. Truman realized some of the original excavated stones contained stone masons’ marks, like that of the square and compasses on this piece.† He donated one of these stones to the Supreme Council, 33°, S.J., on November 22, 1952. A small plaque at this stone’s base bears the presidential seal and reads “Original White House Material / Removed in 1950.”

*“The White House Is Falling Down: About this Gallery,” The White House Historical Association, accessed September 24, 2019,  https://www.whitehousehistory.org/galleries/the-white-house-is-falling-down