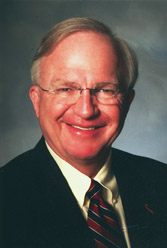 Ill. Dean Alban, 33°, Director of Membership Services wrote to all Scottish Rite Masons who joined in 2009 asking why they joined the Scottish Rite. This is one of the responses.

I was raised a Master Mason in 1974, my senior year at the University of Oklahoma, in Norman Lodge No. 38 in Norman, Oklahoma. My father—then almost a 50-year Mason—raised me himself. In 1977 I had finished graduate school, was admitted to medical school, and was weeks away from beginning classes in Kansas City, Missouri.

At that time, most banks stopped making school loans because of the high default rates. Their decision caught many students by surprise all over the country. I was one such student, and it was only a few weeks until medical school started. The admissions office was sympathetic enough, but they reminded me that I had indicated I had resources to attend, and if I could not pay my tuition within the next week, I would forfeit my place in the soon-to-begin class.

Being a physician had been my life-long dream. I had visited essentially every bank in Kansas City looking for a school loan, and things looked pretty grim. Then I happened to drive past the Kansas City Scottish Rite Temple, and something made me pull into the parking lot. Although I wasn’t a Scottish Rite Mason, I knew they were still my brothers.

Bro. Jack Furlong, KCCH, was the Valley Secretary. He listened very sympathetically and asked how much was I looking for. I explained that the tuition was almost $6,000, that I had a part-time job, that my wife was working full-time, and that by careful stewardship of my meager funds, I felt I could make it with about $1,500 in loans for the first year. Remember this was in 1977. He pondered what I had said and asked me to come back after lunch. He also said that the Scottish Rite did not make student loans, but that he would see what he could do.

I figured he would somehow find a $50 grant or something like that because he seemed to care a lot.

When I returned and sat down before him at his desk, he pushed an envelope across the table and said, “This is all I can do.” When I opened it, I found a check for $10,000. I was astonished. I was overjoyed! I would not have to work as much and could be a more devoted student. I asked him, “What do I sign?” He said, “No signature, you’re a brother. Pay us back when you can.” And that was it.

This was the first loan I paid off when I graduated.

Fast forward to ten years after I finished my medical training and was an emergency physician at a Kansas City hospital. A frail, elderly woman who was deathly ill came to the ER. Her last name was Furlong, and I asked her if she knew Jack Furlong. She perked up and said he had been her son, but that he had died a few years before. I was able to pull her through that emergency and she survived. She benefited from the services of a physician, a Master Mason, who had been given the opportunity of a medical education because of her son, a brother Master Mason.

By 2009 I had been away from Kansas City for more than twenty years. I wanted more than ever to be part of the Kansas City Valley, not because President Truman and others had belonged there, but because of a man named Jack Furlong. When I petitioned the Valley, the question was asked that since I was so close to St. Louis, why would I want to be initiated in Kansas City? When I explained my petition was approved, and last spring I became a Scottish Rite Mason.