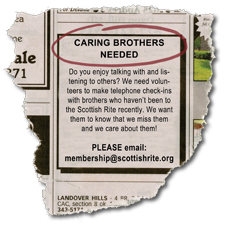 Many of you have shared your positive experiences about calling “lost” brothers in our Brother to Brother Program. It is one of the reasons we are so convinced that Brother to Brother can and will positively change the Scottish Rite. Reaching out to a brother one-on-one, engaging him, listening to his Masonic story … isn’t this really part of why we signed up at the beginning of our Masonic journey? We would like to share one such story that we recently encountered.

This past September, SGC Ron Seale, 33°, attended the Valley of Winston-Salem, N.C., and talked about the Brother to Brother Program. Prior to the meeting, we used the Sentinel Database to search for nearby brothers who had been “lost” and found Bro. Larry Holder, 32°.

It seems Bro. Holder had returned home to North Carolina after military service in Germany. Larry and his wife, Cathy, started a business teaching gun safety, and after some talking, he agreed that he would like to come back and get involved in the Scottish Rite again. Bro. Stan Dodd lives near Larry, and they got acquainted. The two new friends and brothers attended the dinner and meeting at the Winston-Salem Valley.

Larry started telling Stan his story of being one of the first Americans and certainly one of the first Scottish Rite Masons to enter Czechoslovakia after the Cold War had ended. He spoke passionately about the reception he and the other Scottish Rite Masons received from the brothers who had been behind the Iron Curtain. Larry even showed Stan a special gold coin that he and the rest had been given to commemorate that day. He still carries it with him. After a little research, we found a Scottish Rite Journal article about the very visit Bro. Larry Holder had mentioned the night before!

On November 18, 1990, the year after the fall of the Iron Curtain, the newly freed brothers in Czechoslovakia held a ceremony of rekindling the light of Freemasonry in Prague. At that time Bro. Larry Holder, 32°, was serving in the military and was a member of the NATO Bodies. Little did Larry know he was to play a part in Masonic history!

Soon after the rekindling ceremony, correspondence between the Czech Republic and western Freemasonry began in earnest. These Masons who had risked their lives holding on to their Masonic principles wanted to once again be a part of universal Freemasonry. In February 1991, the Grand Master and several other members from Yugoslavia were made 32° Scottish Rite Masons in Long Beach, California. Requests were then made to SGC Fred Kleinknecht, 33°, to hold a reunion in Prague later that summer. It is here that Bro. Holder became involved.

With permission from SGC Kleinknecht, the NATO Bodies put together a degree team, traveled to Prague, and conferred the 4° through the 32° on forty-some Master Masons of Czechoslovakia and Yugoslavia. Bro. Holder was a member of that degree team.

As great as this story is, the real story is the fact that Larry Holder is back in the Scottish Rite. His words to Stan in an email the next day confirmed the value of the Brother to Brother Program:

Thank you, so much for what you and the Scottish Rite did for me. It was a humbling experience to say the least. I truly enjoyed the fellowship as well as the warm reception all of you gave me. As you and I were walking in, I felt uncomfortable having been away so long, but once I entered the room it was as if I had never missed a meeting. As I was driving home I didn’t think why I was never asked why I dropped by the side, but only how great it was for me to be back.