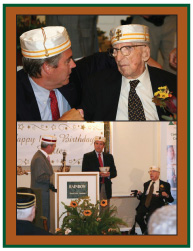 For his second birthday in a row, Ill. Walter Breuning, 33°, retained his title as “The Oldest Man in the World.” At least that is his title according to the Guinness Book of World Records. Robert Young, Senior Consultant for Guinness World Records, showed up at Bro. Walter’s birthday party to honor him for having lived longer than any other man previously. Young expressed his sentiments saying, “Walter is an inspiration.” Young then presented Ill. Breuning with a copy of the 2011 edition of the Guinness Book of World Records that list him as the oldest man. There are still three women living that are older than Walter, although all three of them are 114 as well.

A special party celebrated Walter’s 114th birthday on Tuesday, September 21, 2010, at the Rainbow Retirement Center in Great Falls, Montana. As has been customary at Walter’s recent birthdays many dignitaries showed up including Montana Governor Brian Schweitzer, Great Falls Mayor Michael Winters, and two television producers from Montana PBS who presented Walter with a regional Emmy they had won for an interview with him last year.

Bro. Walter gave a prepared speech that lasted about six minutes. He spoke briefly of his time as a young boy in South Dakota, telling everyone how difficult life was back then with just horses for transportation, no electricity, waking in the dark, and going to bed in the dark. “For 11 years we had just kerosene lamps for light.” Walter then encouraged others to be kinder with a simple message: “With all the hatred in this good world, let us be kind to one another.” He moved to Great Falls with the Great Northern Railroad in 1918 at age 22 and has remained a fixture in that community since then.

It is not surprising that Walter is also the oldest Freemason and Scottish Rite Mason in the world. He has now been a Mason for 85 years and a Scottish Rite Mason for 74. Approximately 50 of his Scottish Rite Brothers showed up at Walter’s party to help him celebrate. Ill. David Nielsen, 33°, Deputy in Montana, presented Walter with a gift from the Supreme Council. Nielsen said that he was not there to celebrate Walter’s quantity of life but his quality of life. Quoting Walter from last year, Nielsen said he remembers the comment that it is “What we do everyday that makes a life.” Deputy Nielsen stated that Walter has done that by giving to others, counseling others, and making others’ lives memorable with his good deeds. Deputy Nielsen thanked Walter for mentoring others through his many Masonic organizations and his church.

Having had the opportunity to interview Walter last year at his 113th birthday, it was great to be able to speak with him again this year. He appeared to be a little slower, and I had to talk a little louder with him, but he hasn’t lost his wit. When I re-introduced myself to Bro. Walter, telling him I was with the Supreme Council, he asked if we were doing any good “back there.” I responded by telling him that we were trying real hard. He had a quick retort: “That’s good because you never did before.”

As usual Walter gets in the last word!