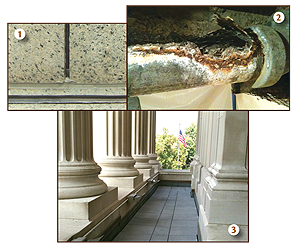 Photos: A Work in Progress—1. As part of the effort to minimize water infiltration into the building, the deteriorated sealant joints on the Sphinx pedestals are being replaced and protected with a lead cap. The existing, failed sealant joints are removed and new sealant and backer rod are installed in the open joints before the lead joint cover is installed. 2. In the Burns Library, failed and corroded pipes from the bathroom on the Entrance Level have allowed moisture to saturate the ceiling of the Burns Library. The failed piping is currently being capped/replaced. 3. At the colonnade level, the existing failed roof membrane has been replaced with new roof membrane system with pavers. —Hartman-Cox Architects (Hartman-Cox Architects)

For almost 100 years, the House of the Temple has been an impressive presence at 1733 16th Street NW in the District of Columbia. It has become an historic landmark, attracting more and more visitors as the years pass. Its expanded libraries and Masonic displays have added to its attraction as has Dan Brown’s book, The Lost Symbol. In the years prior to the early ’90s, the Supreme Council acquired all the properties behind the Temple on S and 15th Streets, so our property now totals one-half a city block. We have good reason to be proud of this magnificent and historic headquarters and museum and its grounds and to be thankful for those farsighted Scottish Rite Leaders who chose the site, acquired the land, and selected the renowned John Russell Pope as architect and overseer of its construction.

The Statutes of the Supreme Council designate the Grand Executive Director as Custodian of the House of the Temple, subject to the executive authority of the Sovereign Grand Commander. As Executive Director and Custodian, I am responsible for management of the House of the Temple. From the first time I entered this massive building with its hidden spiral staircases, and even now after having worked here for many years, I am struck by its architectural beauty and eminence as the headquarters of the Ancient and Accepted Scottish Rite of Freemasonry, Southern Jurisdiction—the Mother Supreme Council of the World. It is appropriately positioned in our Nation’s capital, up 16th Street from the White House, in the most important city in the world.

Next year, 2011, is the 100th anniversary of the historic groundbreaking for the building and four years later will be the 100th anniversary of its completion. It is not unexpected then that this almost 100-year old structure requires extensive updates of utility systems, elevators, entrances, and fire safety measures to comply with today’s codes and for the safety and comfort of employees and visitors. A four-year long program of inspection and investigation of the building from top to sub-basement has thoroughly identified and documented what is needed to bring it into compliance with today’s building and fire codes and to prepare it for the next 100 years. Accordingly, estimated costs have been calculated for this. Detailed information is provided in other articles in this issue of the Journal.

One of the major projects that could not wait for the start of the Capital Campaign was the urgent need for replacing the upper roof. This has been accomplished and was paid from budgeted accounts.

Now that the needs have been identified to prepare the House of the Temple for the next century, we will move forward and raise the necessary funds. At the end of this issue of The Scottish Rite Journal, there is a pledge form that you can use to offer support for the Rebuilding the Temple Capital Campaign. One hundred years ago, our forefathers had the foresight to create a grand headquarters building for the Scottish Rite; we are now the guardians of this beautiful landmark structure. Won’t you join me in helping to preserve it for our future brethren and the world?