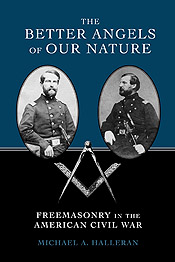 About fifty years ago I was made Free Mason in the Ridgely, Missouri, lodge of Free and Ancient Masons. After some years we organized a lodge of Free Masons in Smithville. I was one of the charter members. The lodge flourished for some years, when the war of the rebellion came on like a cyclone. Some of the brethren were for the Union, some for secession. So brethren disagreed out of the lodge and on the street. In the lodge we said brethren should agree in and out of the lodge. But a storm was too plainly brewing and the shock was at hand; so we passed a resolution to surrender our charter back to the Grand Lodge of the State of Missouri, instructing our secretary to send the charter and jewels to the Grand Lodge. This was in October, 1861, or thereabouts.1

And so the Craft went to war. For many men, however, Masonry was never far away. As we shall see, the fraternity continued to thrive and preserve at least a semblance of brotherhood despite the conflict. Many Freemasons in the same regiments organized travelling “Military Lodges” that held regular meetings, initiated new members, and provided for the wants of less fortunate soldiers and civilians, whether members or not. In those regiments where travelling lodges were not permitted, Masons messed together, tented together, and, the evidence shows, maintained close associations within the military organization.

Not Permit it to be Done by Others

Although the war unquestionably killed thousands of members and disrupted normal operations at the home lodges, not only of Masons but of other fraternal societies as well, it also brought to the forefront a unique facet of the fraternal organization: its informal system of mutual aid. These brotherhoods—the Masons and the Odd Fellows in particular—had long-established procedures for aiding fellow members away from home. Originally intended for use by stranded travelers or a fraternity brother beset by highwaymen, these procedures—consisting of secret phrases or specific gestures taught within the lodges—could be used to summon assistance from a brother nearby. Although such communications were almost certainly never intended for a conflict on such a vast scale as the American Civil War, soldiers and sailors on both sides “requisitioned” Freemasonry when the occasion required it.2

These Masonic ties were invoked in camp, in the field, in prison and in battle. One example of how Masonry was a factor in the field occurred at the Battle of Gettysburg (1–3 July 1863). A private, Anson Miller, of Co. J., 151st Pennsylvania, was shot four times near the Lutheran Seminary. Left behind by his retreating comrades, he was set upon by a group of rebel troops who stole his clothing, blankets and food until the wounded soldier made a Masonic appeal:

[He] used those words which a Master Mason hears and heeds, even amid the fury and din of battle. Immediately there stepped out from among the Rebel soldiers one who remember his duty to a needed brother. He was a Tennessean—Menturn by name. He declared that he had never robbed a wounded foe, and that he would not permit it to be done by others.3

Incredibly, Anson’s property was restored, he was evacuated and despite dim prospects, he survived the battle.4

A second example is found during the Second Battle of Manassas (29 August 1862) where one of Jackson’s “foot cavalry” described a curious scene.

The brigade being called to attention, instantly was on its feet, and when the order was given to forward, it rushed to the front. Reaching the field, we emptied our guns into the enemy, and charged them with empty guns. They turned and ran, leaving many dead and wounded on our side of the railroad. Approaching these men, lying on the ground about one hundred yards from us, I noticed one of them on his back, gesticulating with his hands, raising them up, moving them violently backward and forward. I thought he was trying to attract our attention, so that we might not injure him in our advance. When I reached him, I recognized by his shoulder straps that he was a Yankee captain, and one of our captains, who was running on my left, said he was making the masonic sign of distress.5

Although the report contained no clue if the distress call was ultimately answered, the fact that it was noted and recorded by an ordinary soldier provides some insight into the pervasiveness and influence of Freemasonry.

It is manifestly evident that the fabric of America was torn apart by the Civil War. That Freemasonry formed a significant part of that fabric has not been readily recognized. Although it is easy to dismiss the role of the Masonic fraternity during the war as just another social club with grandiloquent titles and preposterous costumes, that assumption is false. A study of the Civil War illustrates the particular ways in which individual Freemasons translated their Masonic experience from a peacetime social function to an indispensible resource in war. Masonic aid took many forms. In some cases, it preserved property from the unsparing hand of war by guarding a fellow Mason’s house, safeguarding his personal possessions from looters or thieves, or protecting a Masonic lodge in a captured town. In other instances, Masons cared for the wounded—often un-asked, but many times in response to a fraternal call for help. Masonic prisoners of war were beneficiaries of fraternal kindness, receiving food, clothing and medicines from their warders who were also members of the Craft. In startling examples of Masonic interventions during actual combat, Masons more than once saved the lives of their brethren along the front lines. Despite the indecision and oftentimes powerlessness of the Grand Lodges in ameliorating the suffering and hardship of war, individual Masons took it upon themselves to inject their concept of brotherhood into the war with remarkable results.