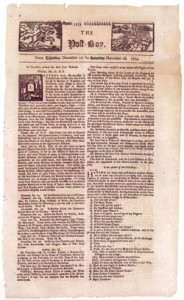 After initiation, Entered Apprentices often ask why the “esoteric work”  is spoken. The traditional answer given is usually analytic: according to the Oxford English Dictionary, the esoteric concerns “doctrines, treatises, modes of speech,” and so on, which are “designed for, or appropriate to, an inner circle of advanced or privileged disciples.” The esoteric work is spoken because men have believed for centuries that speech is the best way to impart a secret, as we are taught by the lesson of the shibboleth in the twelfth chapter of Judges in the Old Testament. The “exoteric” in Masonry has thus become synonymous with Masonic writing, such as in the Scottish Rite Journal or within one’s grand lodge monitor.

Although speech and secrecy seem inherently related, speech as such is also important to Freemasons because of the way in which it announces presence. Unlike writing, speaking to another imparts a degree of personal intimacy and emotion in ways that writing cannot. Reminding us that Abraham “knew God’s presence when he heard his ‘voice,’ ” Father Walter Ong has argued that because “sound is indicative of here-and-now activity, the word as sound establishes here-and-now personal presence….” I submit that the written word speaks death, that text as such is death, and that only the personal presence of speech can enliven it. In Masonic ritual, speech paradoxically becomes a kind of writing in sound when it is inscribed upon the mind as a promise, otherwise known as the speech pact. My argument is that the importance of speech is not so much that it is the vehicle of a secret, but rather, that it is the medium of the Masonic pact.

When Masons think about speech pacts, we are prone to focus on the obligation, which is the center of most Masonic degrees. The lesson of the importance of the presence of speech and its role in the pacting, however, is reiterated repeatedly in each degree external to the obligation, and in ways that often escape notice. For example, let us consider a biblical passage that most Entered Apprentices hear:

Behold, how good and how pleasant it is for brethren to dwell together in unity: It is like the precious ointment upon the head, that ran down upon the beard, even Aaron’s beard, that went down the skirts of his garment: as the dew of Hurmahn, and as the dew that descended upon the mountains of Zion; for there the Lord commanded the blessing, even life for evermore.

This Song of the Degrees of David speaks of the joy of gathering, presumably when the tribes were united; brotherly love is described as a permeating perfume and a quenching morning dew. More importantly, however, is the way in which this joyous meaning is communicated: it is a psalm, and therefore a song—a sacred sonnet, to be more precise. The psalm is meant to be sung or spoken in melodious speech, which is precisely what the conductor does, into the passive ear of the candidate.

While experiencing the First Degree, the candidate must rely on the firm grasp of a conductor and the speech of strangers. (Perhaps not coincidentally, the senses an infant first develops are those of touch and hearing, and in this respect the E.A. degree is a reenactment of birth.) The candidate is asked to trust those whom he has not met. Truth and fidelity are conveyed through the voice, and more specifically, through a vocal tone of assurance.

It is in the emotional or affective character and personal presence of human speech that we can locate the purpose of pacting: Peace. Peace, rooted in the Latin pax—to be at ease with another—is related to the Latin pactum, “to fix or secure.” These ancient words are antecedent to pact, an agreement between two or more parties in the interest of peace. Insofar as speech is not speech without two parties (a vocalization with no one to hear it is merely that, “voice” ), we find that a pact is already implicit in the concept of speech as such: if you are listening and I am speaking, then we are at peace—at least temporarily. In this sense the term “speech pact” is somewhat redundant.

Such redundancy, however, is at the center of Masonic labor: things are repeated in speech, over and over again, as if to reestablish peace and harmony at every syllabic utterance. In other words, insofar as Freemasonry concerns the establishment of peace and harmony among a brotherhood of equals, ritualized speech is the primary way in which this is achieved. The obligation is the most obvious performance of Masonry’s ritualized speech-pact, but I would also argue the opening and closing of a lodge, the formal manner in which we address one another, the recitation of the Psalm 133, even toasts at Agapes and Festive Boards, are ways in which our pact to each other is renewed in speech.

Most Masons are aware that many of our esoteric secrets have been published and written down—from the 1723 exposés in The Flying Post and The Post-Boy to contemporary Internet web pages. Or, to modify the motto of the cult television hit, The X-Files, “the secrets are out there.” The problem with these exposés is that they are written, and print is inert. Symbols on the page mean nothing—a mind has to contemplate them. Analogously, written secrets do not live—they need a mouth to vitalize them. A reader, in turn, does not make a community. Only a reader speaking with others present makes a brotherhood, which is why one cannot become a Mason through mail-order or written examination. Print and writing—indeed, all symbols—are akin to death. This is why true Masonry is not simply knowledge, but also performance, a wedding of what one knows with what one says and does. Hence, I argue that Masonry is a kind of present knowledge and feeling that is only borne aloft by speech.

Of course, I recognize the irony of such pronouncements: this article is, in fact, written. As part of our exoteric labors, writing and reading remain an important Masonic endeavor. Nevertheless, I suspect many readers recognize what I have said in their own Masonic experiences, for they have heard and spoken and felt the pacting of Masonry. So, in answer to the question, “Why is the esoteric work in speech?” I think the best answer is this: because community is sustained in speech, not print, and the experience of brotherly love is not read, it is spoken.

Behold, how good and how pleasant it is for brethren to dwell together in community—in speech!