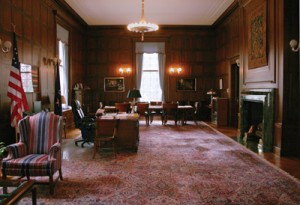 By Roger Barnett, 33°, Deputy of the Supreme Council in Kentucky

When the task of rebuilding the House of the Temple was presented to the Sovereign Grand Inspector Generals and Deputies of the Supreme Council at the 2010 Leadership Conference in New Orleans, I had hoped that the brothers of the Orient of Kentucky would see the urgency of this matter. They did, and I am here to praise the Scottish Rite Masons in the Commonwealth for their efforts in raising over a million dollars for this very important and worthy cause!

With the Orient of Kentucky’s rich history in Scottish Rite Masonry, I felt compelled to put together a campaign to raise money through donations from as many Scottish Rite Masons in the Commonwealth of Kentucky as possible. I felt it was important to give every brother the opportunity to contribute to this great cause. It didn’t matter the amount of the gift. What mattered most was giving each brother an opportunity to be a part of restoring a landmark so important to not only our rich history, but also to the future of Scottish Rite Freemasonry.

As I spoke of this task throughout our Orient, I was reminded of a couple of scriptures in the Bible. The first is Luke 21:2–4, the Parable of the Widow’s Offering. It tells how a poor widow gave an offering of only two small copper coins. However, she gave more than all of the others because it was all she had; the others gave their gifts out of their wealth. My point was that it is important that everyone felt they had a part in the rebuilding the House of the Temple, no matter how small. Every contribution is significant.

The second scripture is Matthew 25:14–30, the Parable of the Talents. It is about how the servant took his talent and buried it for safe keeping. Each of us has a responsibility to invest our time and efforts wisely and not to stockpile them. As an Orient, do we have the tendency to hoard up our resources to feel safe, as the servant did in the parable? Our resources are important, and how we invest them is vital to our future, but don’t forget, we have the responsibility to invest our resources in our future, which includes our landmarks as well as our future members.

I am so proud of the members of the Orient of Kentucky. They met their goal and took pride in what they accomplished—helping to restore our House of the Temple. It is not just a historical building, but something each of them felt a personal connection to.

I encourage those of you who have not taken the opportunity to donate to this worthy cause to take the time to do so now. Your help is needed and will be appreciated. Don’t feel that what you can give is too small to make a difference! I am so thankful that the majority of our members in Kentucky did not feel this way. I am reminded of the brother mentioned in SGC Seale’s article last month. This brother, instead of going out to dinner with his wife to celebrate their anniversary, sent the money he would have spent on dinner to help restore the House of the Temple.

I am confident that each of you will step up to the task of assisting in restoring our House of the Temple. Insuring that the future Scottish Rite Masons will continue to have a landmark, vital to the community and all of Freemasonry.