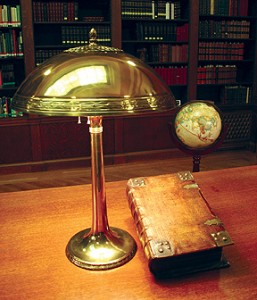 Everyone has some personal “stuff” on their desk. Some have family photos or some books. Others have their kids’ artwork. Well, for me, I also have a Bible(1) sitting on my desk. And, it’s not because I’m married to a minister, either. This Bible is really unique. It’s not just any Bible, it’s a ratty old-looking Bible, with part of the cover coming off. And, it has been on my desk since I first began working at the Scottish Rite. Embossed on the leather cover are four tiny gold stamped Scottish Rite symbols representing the four bodies of the N.M.J.: the Lodge of Perfection, the Council of Princes of Jerusalem, the Chapter of Rose Croix, and the Consistory of Princes of the Royal Secret. The spine has a square and compass. Years ago, I found it among a stack of old books in the basement of the House of the Temple. The cover reads, “Presented by the Ancient and Accepted Scottish Rite of Freemasonry Valley of Pittsburg, Pennsylvania.” I don’t know where it came from nor the owner, but it was proudly presented to a brother by his Valley when he joined the Scottish Rite.

Now, before talking about Bibles and Freemasonry, I first have to dispel a myth. There is no such thing as a “Masonic” Bible. What? You might question me. Yes, it’s true, there are Bibles used in Masonic ritual. There are Bibles given as gifts at Masonic occasions. Bible verses are even quoted at meetings. And, themes from Bible stories can be found throughout ritual. But, a Bible is just that—a Bible. There isn’t anything different added or changed inside a Bible that happens to have Masonic symbol on the cover. Believe me, I should know, I graduated from seminary.

But, these “special” volumes of sacred law might just happen to have Masonic symbols on the cover. Or, a presentation page on the inside, where officers of the Lodge or other Masonic body can autograph for a brother. Or, even a section at the beginning of the book which contains some historical information about the use of Biblical passages in Masonic ritual. Go ahead, take a look for yourself. Most are just a regular plain old King James Versions of the Bible.

Bibles at the House of the Temple

The largest Bible(2) in our collection is 20″ × 13½” and 5 inches thick! It belonged to one of the founders of the Scottish Rite, Dr. Isaac Auld. A medical doctor, Auld served as a Grand Commander 1822–1826. This Bible is huge! It weighs over twenty pounds and was donated to the Supreme Council by the great-granddaughter of Dr. Auld. The story of the Bible is also unique, as during the Civil War, when Sherman’s army swept into South Carolina, a member of the Auld family was reading the Bible when the Union army patrol surrounded the Auld home and ransacked it. The Bible had been pushed under a covered chair and escaped the pillagers. No soldier would have carried it very far due to the large size and weight. The cover has several layers of leather, and the spine has an additional fuzzy leather cover, with hand stitching in areas that had ripped. There are engraved brass corners along the edges and brass clasps to keep the book closed.

Believe it, or not, another Bible(3) we have on display has an even more interesting story. Belonging to Federal Lodge No. 1, Washington, D.C., the Bible used at the funeral of George Washington is housed in the library of the Supreme Council. On December 14, 1799, George Washington died at Mt. Vernon at the age of 67. The Masons helped conduct the funeral at the request of Mrs. Washington. Alexandria Lodge (from Virginia) invited Federal Lodge (from the District of Columbia) to take part in the ceremonies. Infantry, clergy, Masonic Brethren, relatives, and other citizens processed to the grave. The chaplain of Alexandria Lodge conducted the burial service from the Book of Common Prayer and closed with a short address, which was followed by the Masonic rites. And this Bible was there! It is 10″ × 9″ with a worn leather cover. No Masonic symbols or other additions have altered the sacred text.

So, I’ve mentioned the largest and the most famous Bibles housed in our collection. What about the oldest? Dating from 1572, the Nouum Testamentum(4) is an amazing rare volume which features both Greek and Latin parallel passages. And, while it isn’t a complete Bible, (it is only the New Testament), it is impressive nonetheless. When handling the volume, it is large in size, 16½” × 11″ and is only ¾” thick. It has a white-colored vellum cover, very thin to the touch. The pages of the volume are rather heavy, with every other line of the Bible verse in Greek or Latin, alternating.

What I think is our most beautiful-looking Bible(5) is a German translation, Biblia, Das ist: Die ganze Heilige. Schrift Alten und Neuen Testaments dating from 1641. This Bible was really featured in the 2004 movie National Treasure. It is another large Bible, 16″ × 10½”, and it is 4½” thick! Another interesting New Testament(6) in the collection dates from 1834. The inscription reads, “To my father’s best friend John R. Wood, with affectionate greetings from Croissy, December 25, 1952.” What is unique about this one is that the lettering is in gold, and there are only 5 copies known to be in existence. It was donated to the library in 1980 by John R. Wood, 32°, a member of the Supreme Council of France. And, there are more and more unique and rare pieces in our collection. One Bible(7) dates from 1793, another from 1900,(8) and many, many copies, versions and various English translations post 1900.

Past Grand Commander Auld is not the only Grand Commander who has left his Bible with the Supreme Council. The Albert Pike Collection houses a 2-volume French set, La Sainte Bible,(9) dating from 1669. Our Burl Ives’ Collection contains one of the most “common” editions of a Masonic Bible, one that even you, might own! I personally grew up with this one on the table of our living room. You know, in the nice room you aren’t allowed to mess up with your toys. It’s the hardcover Masonic Heirloom Edition. (You know the one, its royal blue, with Jesus on the cover.)

We have a collection of smaller Bibles that have made their way into the stacks. There must be 25 of them, or more. One has a beautiful black leather cover embossed with a square and compass. It belonged to a Brother named Roy Badger Jenkins, who was raised in George C. Whiting, Lodge No. 22, F.A.A.M, Washington, D.C., June 25, 1920. This man has inscribed all of his personal Masonic memberships and affiliations, as well as offices held in the first several pages of the Bible. In the middle of the Bible are pages for marriages, births, and even a Family Temperance Pledge, since this Bible was printed in the time of Prohibition.

We also have plenty of small Bibles with Masonic symbols on the cover (see photo right). One small Bible(10) was presented to a Mason named Henry C. Oliver. Who was he? We don’t know. But, somehow it made its way into our collections. Another Bible(11) was presented to Bro. Harvard John Williams by Williamsport Consistory of Pennsylvania. We don’t have a record of this man, either. There are Bibles that belonged to both men and women, inscribed with unique messages, but it is frustrating that we don’t have any record of who they were or why they are in the stacks. 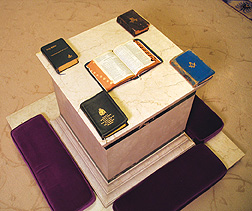 The collection at the House of the Temple contains many unique Bibles, with interesting stories. But, how about yours? Do you know where your family Bible is located? To whom did it first belong? Does it have any family history inside? Go check it out. Bibles are often found in American homes as part of a family library. They tell a story, and many share family histories and—if you are lucky—some secrets. And, the next time you are visiting the House of the Temple, don’t forget to check out the altar in the Temple Room. As you might have guessed, we have a Bible located there, too, but you’ll have to come to Washington to find out which one it is.

How to Care for Your Family Bible