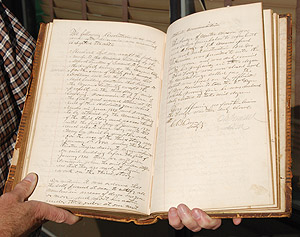 Photo: A close-up photo of the March 4, 1889, resolution transferring title of the Masonic College building, contents, and grounds to the newly formed Somerset Schools Board of Trustees.

Have you seen the popular movie National Treasure: Book of Secrets? If so, you know that in the movie the Presidents of the United States recorded historical secrets in a well-worn leather book that was hidden in Washington, D.C.

As it turns out, Washington is not the only place that has a book of secrets—the community of Somerset, Kentucky, has its own national treasure! The secret volume in Somerset is a minute book of a local Masonic Lodge that has recently been rediscovered after being lost for nearly 100 years. The secrets in this book are not a map to a city built of gold as in the movie, but are linked to Somerset High School and help paint a fascinating picture of the origins of the institution. For instance, why are the school colors purple and gold? Why does Somerset High School sit on College Street?

The story begins immediately after the American Civil war in the year 1865 when South Central Kentucky was decimated from raids by both Union and Confederate troops. Since the economy was in shambles and minimal opportunities for education were available for students, local men who belonged to Somerset Lodge No. 111 decided to pool their resources and establish a school with a traditional curriculum including reading, writing, arithmetic, social studies, and the trades. This school was constructed by the Masonic Lodge in 1865, named the Somerset Masonic College, and received by a grateful community with two nights of public speaking, dancing, and feasting. The Masonic College building consisted of two floors for classrooms and a third floor where the Masons met. This school was of great importance for Kentucky because it was the place where children in this part of the state could come to get a formal education.

This story comes to the present day when Ms. Ann Compton, daughter of the late Somerset businessman and Somerset Lodge member James F. Prather Jr., disclosed to Somerset Board of Education employee Bro. Cloyd J. Bumgardner that she had an important Masonic document that she discovered while “putting the things away” of her late parents. This well-worn leather volume was a minute book from Somerset Lodge No. 111 containing the origins of the Somerset School District which were in the lodge records from October 18, 1873, through December 14, 1889. 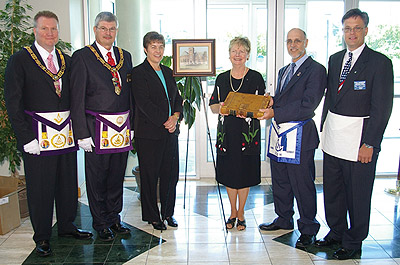 Ms. Compton gave the book to Bro. Bumgardner for safekeeping until the document could be reunited with Somerset Lodge at the 2009 Annual District Masonic Meeting. This meeting was attended by over 350 people including MW Herman Forrester, Grand Master of Masons in Kentucky, RW John W. Johnson, District Deputy Grand Master, recognized the historical significance of the discovery and made the presentation a focal point of the meeting, commenting that “it is important that we maintain a link with our past and the individuals who paved the way for progress in our community.” During the presentation Ann Compton said, “I grew up next to Somerset High School, and my father, his family, my sister, and I as well as all my children attended Somerset Schools. We learned to sing the school song ‘On, On’ at an early age, and my heart still beats a little faster when I hear the old school fight song. The love of our school was instilled in us by my parents.”

With the benefit of 134 years of hindsight, GM Herman Forrester commented, “the Somerset Masonic College is a testament to what visionary leadership our Masonic forefathers had in this community. The act of providing for the children’s education in Somerset helped pave the way for the modern day public school system.” As noted in the minutes of the March 4, 1889, lodge meeting, the Masons adopted a resolution to transfer title of the Masonic College building, contents and grounds to the newly formed Somerset Schools Board of Trustees. This transfer was for a token sum of $3,500, and the resolution specified that the lodge could continue to use the third floor for their meetings. When Compton handed the document to Bro. David Avera, Master of Somerset Lodge, she said “I am sure my father knew the historical significance of this document and he safeguarded it so future generations could know the history of Somerset High School…. I am proud to be able to present this minute book to Somerset Lodge for historical preservation.” Avera accepted the time-worn minute book noting that, “I am proud of the leadership the Masonic Lodge exhibited 134 years ago to help shape the future of South Central Kentucky. The legacy of our forefathers is still evident today through the lives touched by the Somerset School System which evolved from the Masonic College.”

The resolution was ratified at the April 13, 1889, meeting and the deed of conveyance approved for transfer to the Somerset Board of Trustees. Bro. Cloyd J. Bumgardner noted that, “This resolution is essentially the birth certificate for the Somerset School system and our forefathers were visionary in their outlook for our community…. If not for the vision of the Masons of the previous era the educational opportunities enjoyed in Somerset might not now exist.”

Starting in 1844 in Lexington, Missouri, at least 30 colleges and universities have been started by American Masonic Lodges and Grand Lodges, mostly in the Southern Jurisdiction. It is amazing to think that a local lodge would even think about an undertaking as massive as a college, but it was part of the Masonic tradition of meeting the community needs. Most of these schools closed long ago, but a few served as the foundation for contemporary institutions. 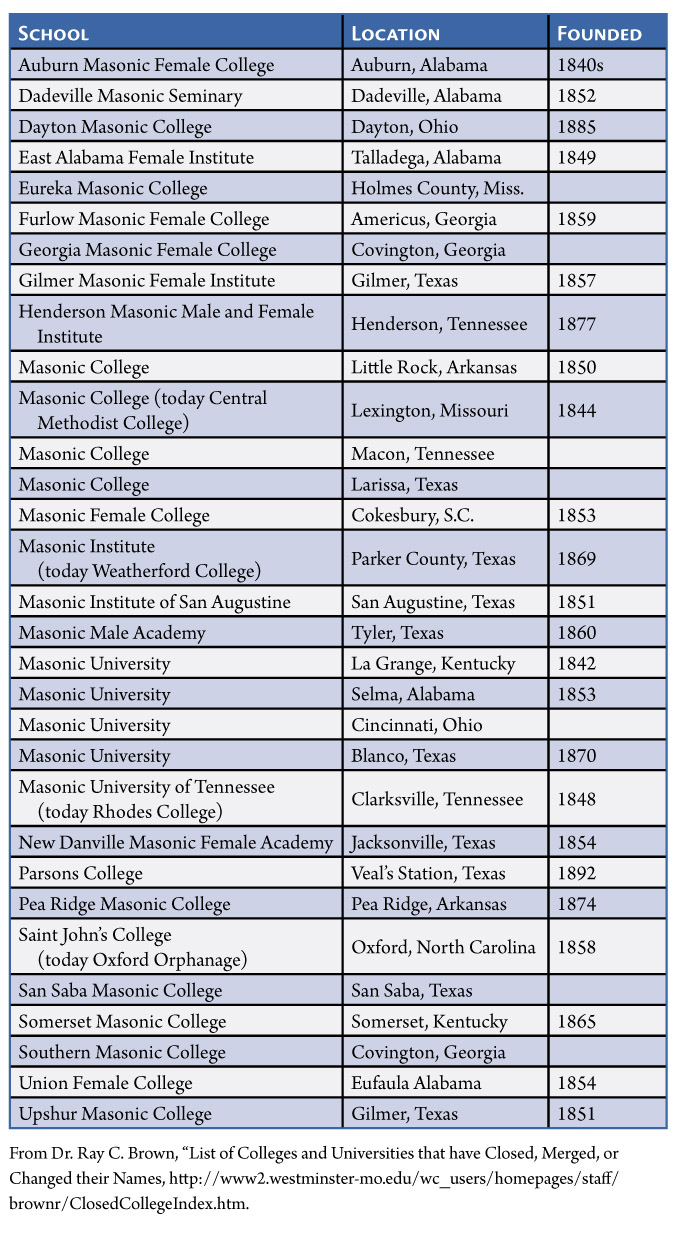