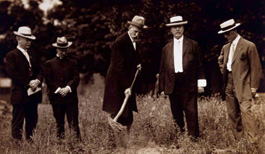 The Grand Commander set May 31, 1911, as the day for the groundbreaking for the new House of the Temple—the 110th anniversary of the founding of the Supreme Council in Charleston, South Carolina. Richardson turned “the first spade of earth in the building of the new Temple” (1911 Transactions, p. 124). In attendance were several members of the Supreme Council and numerous photographers and newspaper correspondents to record the historic event.