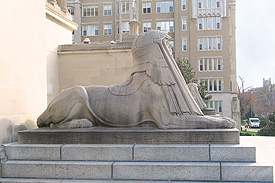 Photo: Sphinx of Power in 2010 (Elizabeth A. W. McCarthy, The Scottish Rite Journal)

The Supreme Council employed the services of Adolph A. Weinman, an architectural sculptor best known for his design of the Walking Liberty Half Dollar—considered possibly the most beautiful coin ever minted by the US Government—and the Mercury Dime. His architectural detailing is also present in many important and iconic buildings here in the United States. He carved the two sphinxes at the entrance to the Temple from solid blocks of Indiana limestone shipped to the site, the double-headed eagles at the four corners of the roof, and the two guardians at the entrance to the Grand Staircase to the Temple Room.

Carving the sphinxes from single blocks of stone could not be duplicated today. At 165 pounds per cubic foot, the limestone block for each sphinx weighs about 76 tons! Moving such a block on modern-day streets would be impossible.

The Indiana Limestone used for the Sphinxes is fundamentally the same stone that was used to face the building at the entrance or atrium level up to and including the roof. After almost 100 years, it basically is in good condition with a few instances where detail has been lost due to sandblasting of the building. Significant portions, if not all, of the limestone has been repointed at some time in the past. In a few instances, some of the point mortar is failing. Repointing and joint repair to prevent further leaking of water into the building has begun in limited areas. A specialty lead flashing has been used in certain horizontal locations, such as the base stones for the Sphinx, to assure that we have no further water penetration there. While the condition of the stone is good, there are numerous instances of moderate to heavy soiling of the limestone. All of the exterior stone, including the Sphinxes, suffer in various places throughout from copper oxide, ferric oxide, algae, and calcium sulfate staining. A general cleaning of the stone will be done with live steam or warm water. Areas of heavy soiling may be removed with an appropriate limestone cleaner, mentioned elsewhere. Areas of cupric staining will be lightened with a poultice application.