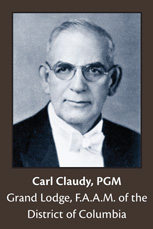 I enjoy reaching out to brothers who have recently joined the Scottish Rite. As we prepared for the 2012 Leadership Conferences I wanted to include the thoughts and comments from our newest members. In a short email, I asked them to consider a few things.

I shared the email replies with Ill. Dick Fletcher, 33°. Dick is PGM of Vermont, Past Executive Secretary of the Masonic Service Association of North America, and my mentor on many Masonic topics. He was impressed with replies from our new Scottish Rite Masons and shares his thoughts in the following Scottish Rite Short Notes.­

Carl Claudy, PGM of the Grand Lodge of the District of Columbia, was one of Freemasonry’s most prolific writers. Perhaps his most popular book was titled Old Tiler Talks. Let me share a short quote from his chapter What is Freemasonry?

“Deep stuff,” commented the New Brother.
“Masonry is ‘deep stuff,’ ” answered the Old Tiler. “It’s so deep no man has ever found the bottom. Perhaps that is its greatest charm; you can go as far as you like and still not see the limit. The fascination of astronomy is the limitlessness of the field. No telescope has seen to the edge of the universe. The fascination of Masonry is that it has no limits. The human heart has no limit in depth and that which appeals most to the human heart cannot have a limit.”
“But that makes it so hard to understand!” sighed the New Brother.

Even in the 1930s Carl Claudy recognized one of Freemasonry’s most perplexing problems: How to properly educate the Freemason as to the real meaning of his fraternity. In early Freemasonry when there were far fewer members, word of mouth was the method of teaching most commonly used. However, as Freemasonry grew and expanded from a collection of a few lodges in Scotland and England to a worldwide fraternity, Masonic Education did not always accompany the significant membership growth.

Perhaps this phenomenon is best illustrated in the aftermath of both WWI and WWII. Membership accelerated to the point where lodge officers became exhausted simply trying to do the number of degrees required and as a result Masonic Education suffered.

Carl Claudy certainly recognized this trend and the Masons of today are struggling with the same concern. Many attempts have been made and continue to this day to deliver Masonic information/education to our members including lodge study groups; Research Lodges; publications; internet activities; and radio, TV, and print outlets.

There is no lack of attempt to provide good information about the fraternity but rarely do we come to the realization that the real issue is not the delivery system but rather how to overcome the lack of interest of our present membership.

Perhaps the voices of new Scottish Rite members can help to answer this question. Recently a questionnaire was sent to a number of new Scottish Rite Masons in the Southern Jurisdiction. The answers received, without exception, raised the issue of wanting to learn more about the fraternity and how important it was that both the lodge and the Scottish Rite help them in this effort.

Let’s reflect on responses of just a few of these new Scottish Rite brothers.

In researching the thoughts of a few of the Scottish Rite Masons of the Southern Jurisdiction who were contacted, everyone talked about the connection between the lodge and Scottish Rite and the importance of Masonic Education. They also found the Scottish Rite to enhance the knowledge they had gained when taking the three degrees in the Blue Lodge.

“I was raised in 1988 in Wisconsin and since then have always desired more knowledge and more involvement and more connection between Masonry and what it can do for the world.”

“Not only was I socializing with the brethren of my lodge but of other lodges as well. I spoke to a couple of Brothers more experienced with the Scottish Rite who described it to me as the College of Freemasonry where we could go to expand and compliment our knowledge of the Blue Lodge degrees and beyond.”

“In my area there was a Scottish Rite Third Degree team that would travel around to lodges and help them perform the Third Degree. After several months a few of them had me convinced that Scottish Rite Masonry would make me a more educated Mason, and after all more light is what we are all after.”

“One of the most meaningful benefits of Masonry and magnified by the Scottish Rite, is the introduction to all of the new brothers, from all walks of life, that I would never have met without the fraternity.”

All of these quotes point out the universality of Masonry and the relationship between the Blue Lodge, the Grand Lodge, and the Scottish Rite.

Let me add a personal story. My own experience with the Scottish Rite began in 1960 and continued for many years thereafter. My Blue Lodge was located in Burlington, Vermont, which was part of the Fifth Masonic District in Vermont. I met numerous brothers around the Fifth District at District meetings and other Blue Lodge functions. However, it wasn’t until my involvement with the Scottish Rite that I became aware that almost every active Mason in the Fifth District was also active in the Scottish Rite. The camaraderie and friendships developed during that experience far too numerous to name, brought us all together in a common goal to better ourselves and to become more knowledgeable about our fraternity.

It is very evident to me that Freemasonry is being presented with one of the greatest opportunities that has ever been given to the fraternity. We are seeing a generation of young men who are committed to bettering themselves through the value system that Freemasonry provides. How do we attract them? Some have already come into the fraternity and of course are telling their friends. But it is what they find within the fraternity that will determine whether they remain active and interested Blue Lodge or Scottish Rite Masons. Their search will depend entirely upon the programs that we put forth. Each of us can begin the process by not only becoming more interested ourselves but reaching out to brothers around us to talk about forming a study group within the lodge, a study group within the Masonic District; and a study group within each Scottish Rite Valley. Study groups cost nothing and would be open to any interested Brother.

Masonic history and Masonic education are very closely linked and together make a fascinating journey. One in which I would encourage all of you to not only travel but enjoy. We can’t always be sure of our facts or our conclusions but the journey itself will be one of the most fascinating trips you will ever take.