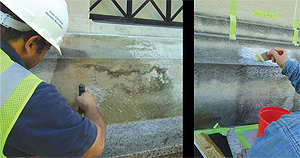 Photo: A contractor tests various cleaning solutions on the East end of the Temple’s north façade to find a product which will clean the limestone successfully with the least impact. (Hartman-Cox Architects)

The House of the Temple of the Ancient and Accepted Scottish Rite of the Southern Jurisdiction of the United States of America is not only a national Masonic treasure, but also a national architectural treasure. In 1911 the Supreme Council undertook a bold enterprise. Combining current and borrowed funds they raised about $1,500,000 and undertook the immense task of relocating their headquarters from 433 3rd St. to a new building befitting the grandeur and dignity of the Supreme Council. That is roughly $33,000,000 in today’s dollars. However, today we could not rebuild the House of the Temple and identically reproduce every element even with a budget of $650,000,000.

In 1911 the Supreme Council hired the finest and most skilled professionals and craftsmen in the country, and spared little expense doing so, to create an iconic and lasting statement to all that was superlative in this country at that time. One hundred years have passed and on the surface very little appears to have changed. Much in the building looks as it was upon its substantial completion in 1915.

In 2007 the Supreme Council commissioned a study to evaluate the building’s present condition and to develop a plan, approach, and preliminary budgets for repairs, improvements, and restoration as needed. The building has been in continuous use and without major changes or upgrades since its substantial completion in 1915. Although well maintained, there is an inadequate fire alarm system, an insufficient fire suppression system, insufficient means of emergency egress and access for the disabled, and the mechanical and electrical systems are at the end of their life expectancies. The House of the Temple requires considerable restoration and rehabilitation work.

A design and construction team, under the direction and leadership of Sean Graystone, 33°, Grand Cross, Building Superintendent of the House of the Temple, set to work during the latter half of 2008 and the beginning of 2009. The reports and recommendations of that team were then summarized in a master report submitted on August 31, 2009, and adopted by the Council at its 2009 session. This report provides the “master plan” envisioned by the initial building study.

The recommendations of that report include the following:

Work commenced, proceeds, and will continue with the full involvement and input of all team members, consistent with the principles of Integrated Project Delivery and the Lean Construction Institute. The National Park Service (NPS) has developed standards and guidelines for various treatments of historic properties. These standards are widely utilized and understood by historic preservation professionals, architects, engineers, contractors, and craftsmen and are published in The Secretary of the Interior’s Standards for the Treatment for Historic Properties with Guidelines for Preserving, Rehabilitating, Restoring, and Reconstructing Historic Buildings. These standards have been adopted by the Renovation Team and the Supreme Council as the guidelines and governing standards for the restoration of the House of the Temple. As noted in the initial building report, the House of the Temple is substantially sound in structure and relatively unchanged in appearance since its completion.

The source of one of the most immediate concerns of the initial reports, water intrusion, has been addressed to some degree by the replacement of two roofs at the upper and colonnade levels and the repair of storm and sanitary lines. In addition, significant interim improvements in fire and life safety were also undertaken.

The following are but samples of recent work completed to date:

As we plan for next year, the Team will be working together to develop the initial design based upon investigations made this year with updated cost estimates to insure the project stays on budget. The continuing work of restoring and rebuilding the House of the Temple will require much time and a high level of commitment on the part of the Supreme Council, as well as the commitment and support of every member of the Rite. It is not only our responsibility to carry this great achievement forward into the next century, it is our duty.

The House of the Temple is an enormously significant building for the Scottish Rite, S.J., Washington, D.C., this country, and the world. It is, most importantly, a symbol of what the Scottish Rite of Freemasonry stands for, as well as a building of beauty, an archives, and an exhibit. It is a lighthouse that directs the attention of every seeker to bring back something more to the Brethren of his local Scottish Rite Valley, where they, too, may become individual stakeholders in the greatness that is the Scottish Rite. We should each be proud to be able to be a part of it and its legacy. As the motto of the 19th Degree states, “The true Mason labors for the benefit of those who are to come after him.”