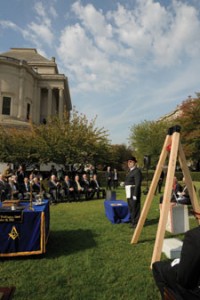 Exactly one hundred years after the Grand Lodge of the District of Columbia and the Supreme Council laid the cornerstone of the House of the Temple, we celebrate their monumental endeavor by reenacting that auspicious event. On October 18, 2011 the Supreme Council hosted a ceremony reenacting the laying of the cornerstone and paying tribute to the men who initiated the great task of creating a building that would serve as the headquarters of the Mother Council of the World for the Scottish Rite. The Supreme Council lead by then Grand Commander James D. Richardson, set out to construct a monumental building that would stand out even in a city of monumental buildings.

On a beautiful fall day several weeks ago in the District of Columbia, guests gathered from all over the country in the east lawn of the Temple to watch as the members of the Grand Lodge of the District of Columbia marched in ceremonial fashion to rededicate the cornerstone of the House of the Temple. The scene was set in accordance with the historical account of the original cornerstone ceremony. On display were many fantastic Masonic relics including, the trowel and gavel used by General and Brother George Washington when he laid the cornerstone of the United States Capitol on September 18, 1793, and the Bible that was used at Washington’s funeral.

This milestone comes at a time when our magnificent House of the Temple is in great need of renovation and restoration. Long needed work has begun and will continue steadily for the next several years. One hundred years of continued use as the headquarters of the Southern Jurisdiction’s Supreme Council without significant renovations has taken its toll on this historic building. Many modifications are necessary to modernize the building with life safety and accessibility improvements, and much more. Fund raising efforts continue through the Rebuilding the Temple Campaign. (For information about restoring and preserving our beautiful landmark contact the Development Office at (866) 448-3773 or rheffelfinger@scottishrite.org.)

The Centennial of the Laying of the Cornerstone Symposium

The three-day centennial event began on Sunday, October 16 with special tours of the building. Robert Heffelfinger, 32°, lead a tour that focused on the Masonic Symbolism in the House of the Temple. The second tour, lead by Sean Graystone, 33°, G.C., and Superintendent of the House of the Temple, concentrated on John Russell Pope’s Legacy, the historic aspects of the Temple, and the unique details of the construction.

On Monday, a symposium was conducted in the impressive Temple Room. The Keynote Speaker, Thomas Luebke, the Secretary of U.S. Commission of Fine Arts, spoke about the historical Sixteenth Street corridor and the role of the House of the Temple in that history. Mary Kay Lanzillotta and Graham Davidson, the principle architects charged with renovating and preserving the House of the Temple, spoke about John Russell Pope and the historical significance of the building’s location in the Historic District of 16th Street, NW. In the afternoon, Arturo de Hoyos, the Grand Archivist and the Grand Historian, gave participants a fascinating look at the symbolism that was so intricately woven into every aspect of the Temple.

Finally, Sean Graystone, the Superintendent of the House of the Temple, provided an update on the progress of renovations and our future plans to restore and preserve our magnificent edifice.

Excerpt from the Grand Lodge of D.C. Ceremony for the Laying of Corner-Stones of Public Structures:

The architect then presents the square, level and plumb to the Grand Master and says:

Architect — Most Worshipful, the necessary preparations having been made for laying the “foundation-stone” of this edifice, I present you the square, level and plumb, those useful implements of the Craft by which you will be able to ascertain that the material which is to constitute the chief cornerstone of the future edifice, and which you are about to lay in its appropriate position, is “well formed, true and trusty.”

Grand Master — Right Worshipful Deputy Grand Master, what is the proper implement of your office?

Grand Master — What are its moral and Masonic uses?

Deputy Grand Master — To square our actions by the square of virtue, and prove our work.

Grand Master — Apply the implement of your office to that portion of the foundation-stone that needs to be proved and make report.

Deputy Grand Master — Most Worshipful, I find the stone to be square. The craftsmen have performed their duty.

Grand Master — Right Worshipful Senior Grand Warden, what is the proper implement of your office?

Grand Master — What is its Masonic use?

Senior Grand Warden — Morally it reminds us of equality, and its use is to prove horizontals.

Grand Master — Apply the implement of your office to the foundation-stone and make report.

Senior Grand Warden — Most Worshipful, I find the stone to be level. The craftsmen have performed their duty.

Grand Master — Right Worshipful Junior Grand Warden, what is the proper implement of your office?

Grand Master — What is its Masonic use?

Junior Grand Warden — Morally it teaches rectitude of conduct, and its use is to try perpendiculars.

Grand Master — Apply the implement of your office to the several edges of the foundation-stone and make report.

Junior Grand Warden — Most Worshipful, I find the stone to be plumb. The craftsmen have performed their duty.

Grand Master — This cornerstone has been tested by the proper implements of operative masonry and I find that the craftsmen have skillfully and faithfully performed their duty. I therefore declare the stone to be well formed, true and trusty, and correctly laid according to the rules of our ancient craft. May the all-bounteous Author of Nature assist in the erection and completion of this building, protecting the workmen from every accident, and may He long preserve this structure from decay.