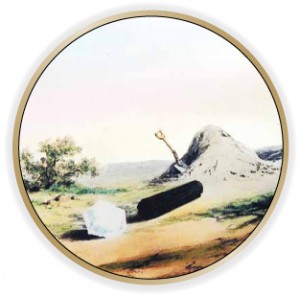 At the end of the Entered Apprentice Degree, when some long-time brothers have dozed off and the candidate thinks his head will explode if the lecture goes on much longer, there is a short final section of material that seems unconnected to the rest of the degree. Coming after so much more memorable discourses on virtues, lodge structure and history, and an explanation of the degree experience, what is the point of this bit of material?

There are three parts of this passage, one enumerating three mineral substances, one giving their symbolic meaning, and one explaining how those symbolic meanings derive from the minerals. Three elements—three meanings—three parts, the number three is found everywhere in Masonry.

The passage in question has much more meaning than merely to emphasize the number three, however. Consider, for example, the color of the elements. The first is pure white, the second is one of the blackest substances known, while the third is often gray, although there are other colors. The first two should remind us of the earlier symbol of the mosaic pavement, which depicted life as checkered with good and evil, represented by black and white tiles. But at this point in the lecture, the more profound lesson is taught that the world we live in and on—our “mother earth”—is neither black nor white, but gray. Gray symbolizes that the moral choices we are likely to confront are not going to be so easily decided as if they were obviously black or white. Moreover, its association with the third element, which is said to be constantly employed for our use, teaches us that these moral choices and dilemmas are constantly before us. This should prepare the newly entered Mason to receive the philosophical instruction coming in the subsequent degrees that will assist him in resolving these challenges.

Some authors have strongly asserted the influence of alchemy on Freemasonry’s symbolism and ritual; certain substances (salt, sulfur, and mercury) used in alchemy were, in some European jurisdictions, placed in the chamber of reflection (along with much else) for the candidate to contemplate prior to his reception into the Lodge to receive the Entered Apprentice Degree. Most Masons today will think of alchemy as oriented around the four elements of earth, air, fire, and water, at least two of which are not especially recognizable in the passage being considered here. However, the Magnum Opus of alchemy, supposedly the method by which the Philosopher’s Stone might be created, contemplates three stages of the endeavor—blackening, whitening, and reddening.

The third of our elements, which has been described as gray above, is also found red in color. To explore the role of alchemy further must, however, be left for another time.

Moving on to the stated symbolism associated with service, we find both fervency and zeal. But are these not very much the same? Our new Entered Apprentice will have to wait for his instruction in grammar and rhetoric before he is, hypothetically at least, prepared to deal with such fine distinctions. From a perspective later in the degree sequence, however, we see by careful consideration that fervency is a characteristic of belief or thought, whereas zeal is more correlated with action, or at least a willingness to take action. The assignment of fervency to the black element is a reminder that fervently held beliefs may be a sign of the closed mind, and that fervency dances on the edge of fanaticism.

The smelting of the most refractory metals may refer to the constructive process of extracting them from their ores, but fire is also a destructive force, often in history the weapon of choice for the “ruthless hand of ignorance.” When Babylon conquered Judah and razed the Temple of Solomon, the city gates were burnt with fire so that Jerusalem could no longer be a secure place to live.

Zeal, being action-oriented, is connected to the gray element, where the gray color teaches that actions have consequences, including unintended and unforeseen ones. What was meant to be beneficial may not turn out that way at all. In this context, we learn why these instructions are appropriate to the Entered Apprentice Degree and are linked with service to a master. The master’s role is to direct the zealous efforts of the apprentice so that he does not go astray.

The key to this passage of ritual is to be found, however, in a return to the first of the three elements, said to teach that the ancient apprentice served his master with “freedom.” This passes by so rapidly in the progression to the explanation of how “freedom” is characteristic of that element that the paradoxical nature of the statement may not even register with the new brother. Even those brothers who have heard the lecture many times may be awaiting the end of the degree and are passive in the face of the contradiction.

How can one serve with freedom? Is not servitude the exact opposite of being free?

The answer is found in the realization of who the true master is. Not every religious reference in the ritual derives from scripture!

According to the Anglican (Episcopal) Book of Common Prayer, unquestionably familiar to the authors of the Masonic ritual, it is the service of the Creator that alone constitutes perfect freedom.

A Collect for Peace
O God, the author of peace and lover of concord, to know you is eternal life and to serve you is perfect freedom: Defend us, your humble servants, in all assaults of our enemies; that we, surely trusting in your defense, may not fear the power of any adversaries; through the might of Jesus Christ our Lord,
Amen.1

Although the three elements have several symbolic lessons to teach, the most important purpose of the final passage of the Entered Apprentice lecture thus is to teach the newly admitted brother one final time that Freemasonry exists for the service of the Great Architect of the Universe above all, and that only in that Master’s service, as taught in the Masonic degrees, is there no risk or danger in doing so with freedom, fervency and zeal.