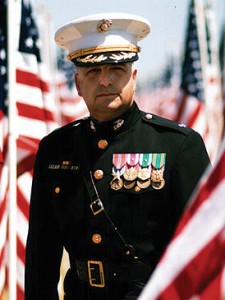 On the morning of September 11, 2001, Lt. Colonel Russell E. Jamison, Jr. was at his workstation at the Pentagon when the hijacked American Airlines Flight 77 crashed into the west side of the building, part of a dramatic sequence of events that changed America and altered Jamison’s life as a proud United States Marine. In his words:

My office was close to the crash site, within 100 yards, but on the “A” [innermost] ring so we were not immediately subject to fire. That said, we knew we had been hit and started evacuation procedures. Once outside we established accountability of everyone in our section and then turned to in order to render whatever assistance we could.

After several intense hours we were informed that the U.S. Army’s Old Guard had arrived, and we were thus relieved of duties and dismissed for a number of days until new office workspace could be arranged for us. As I walked across the South Parking Lot of the Pentagon I kneeled and picked-up a small fragment of slate blown from the roof by the blast that devastated the area. I thought “This piece of history I will carry with me as a reminder to never forget!” and holding on to that piece of slate would serve to reinforce my commitment in what has turned out to be “the Long War.” That same piece of slate would later deploy with me to Iraq.

Only eight months following 9/11, Lt. Colonel “Russ” Jamison received his greatest gift prematurely—the birth of his daughter, Paige, in May 2002. As a father he was blessed. As a Marine he was reminded of the role he must play in facing the challenges in a world of terrorism. As a human being he was acutely aware of the pain and suffering that touched the men, women, and children affected by the events of 9/11.

Jamison is a trained warrior and currently the Joint Training System Specialist within the Marine Corps Forces, Special Operations Command (MARSOC). Trained as an Armor Officer, Jamison completed his tour at the Pentagon and returned to II Marine Expeditionary Force in the summer of 2004. At this time, he deployed from Camp Lejeune to Taji, Iraq, as the Senior U.S. Adviser for the Iraqi Army’s 6th Brigade, at the time part of an elite unit known as the Iraqi Intervention Force. In early 2005, the Brigade completed training and deployed to the city of Mosul. The Brigade arrived at Mosul in time to provide security in support of Iraq’s first National Elections. That work became an intense and all-consuming task throughout Mosul’s most dangerous zones, preparing Iraqi forces to take control, with the goal of reaching the critical point of “letting the American Units go home to their families.”

In February through May 2005, Jamison was still in Mosul, helping the Brigade take responsibility for sectors of the city during a very dangerous period, with each of the Iraqi Battalions and his own Advisor team taking casualties under fire. That’s when a package arrived from a class of 3rd graders from the Willard Elementary in Ridgefield, N.J., who had decided to send Valentines and letters to an American Marine serving in Iraq. One letter in particular touched Russ deeply. It was from Will Wodenchuck, who lost his father on September 11—one of twelve people in this small town to die in the World Trade Center. Jamison wrote this response:

Will—
The reason I am over here is because of what happened on 11 September. I was in the Pentagon that day and I remember. I’m over here for everyone who was hurt by what happened that day. And, I’m over here for you. I know you miss your father very much. And I know he’s very, very proud of you. Please take good care of your family, and be very strong. Okay?

The letter project ended, and, by May 2005 with his tour in Iraq over, Jamison returned to Camp Lejeune and his wife and daughter. He brought the letters home with him. “These letters were each very special, and I hope these kids will be my lifelong friends. I’d love to meet them all. Their messages are life lessons we will impart to our daughter—that it is important to take the time to write and express your appreciation for those in public service.” Jamison did in fact travel to New Jersey that first full week following his return from Iraq, where he met all the kids, thanked their teacher for her efforts and also presented a U.S. Flag that had flown over his Command Post to Will.

On August 1, 2005 Lt. Colonel Jamison was presented the Bronze Star Medal for exceptional meritorious service in connection with combat operations in support of Operation Iraqi Freedom.

September 2009: Creating a Piece of History

Russ Jamison still carries the piece of slate from the Pentagon roof he picked up on 9/11 as a constant reminder of why he is a Marine, the mission of his life and the “lessons” he has learned. In September 2009 Russ was reading his VFW Magazine and came across a page describing Military Service Honor Rings from Veterans Commemoratives, a company in Radnor, Pennsylvania, headed by Bro. Ian Modelevsky.

One ring design featured the United States Marine Corps Eagle, Globe & Anchor sculpted on one side, the Bronze Star Medal and Ribbon on the other side, and a capstone on the top encircled by the words “IRAQ VETERAN.” Russ thought “I wonder if Veterans Commemoratives could figure out how to put my piece of slate from the Pentagon roof on the top of this ring for me?” So, he emailed the president of the company, Bro. Ian Modelevsky, and posed the question. That email started a friendship and collaboration between Russ, Ian, and the jewelers and craftsmen at Masters of Design who make the rings. Special tooling was made and a lapidary precisely cut and shaped the slate to fit on the top of this unique ring. Slate itself is not a precious stone and has no value, but Lt. Colonel Jamison’s piece of slate from the Pentagon was priceless.

Photo: LtCol Jamison’s ring featuring the piece of slate blown from the roof of the Pentagon on 9/11, the Bronze Star Medal, and the Marine Corps Emblem.

Ian Modelevsky stated. “Everyone at Veterans Commemoratives and Masters of Design who participated in the creation of this ring is proud to have taken part in honoring Lt. Colonel Jamison in this way. And, to know that second only to his wedding ring, Russ treasures his new ring, which for him is truly ‘a piece of history’ and will surely become a family keepsake.”

<>h2>Identifying a “Good Man” for Our Gentle Craft

In the process of getting to know Lt. Colonel Russ Jamison, USMC retired, Ian Modelevsky, 32°, shared the story of his father, Bernard Modelevsky, who had immigrated to America in 1921 from Russia, escaping the vicious religious persecution of that time, becoming an American citizen, enlisting in the U.S. Navy in 1942 at the age of 36 to serve his adoptive country, and becoming a Freemason in 1950 to follow the good and charitable path of our gentle craft. His too was a life’s lesson of what courage, determination, and dedication can accomplish.

What you wrote for your father is simply well done—you honored him well. He lived an incredibly inspirational life and I am glad he is living in a mansion in Heaven for God will surely reward him for his time on earth. His life, what he obviously instilled in you and what you are doing confirms to me the value of the ‘Five Points’ philosophy. Only recently I have engaged with a friend here on seeking to join the local Masonic lodge. The charitable work of the Mason’s and in particular the Shriners is what has impressed me the most and I seek to join in that work. I take inspiration from what you sent and will move ahead on this decision.