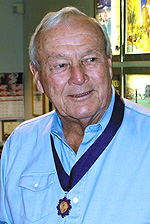 On July 8, Sovereign Grand Commander John Wm. McNaughton honored Ill. Arnold D. Palmer, 33°, with the Gourgas Medal. Bro. Palmer is one of the best known golfers as the beginning of his career coincided with the television age. He won several PGA tournaments dating back to 1955. Together with Jack Nicklaus and Gary Player he is often referred to as part of the “Big Three of Golf.” In 1998 – the same year he earned the PGA Lifetime Achievement Award – he received the 33°.

The medal was presented to him at Bro. Palmer’s office in his hometown of Latrobe, PA. He has plural membership in the Valleys of Pittsburgh and Cincinnati.

The Gourgas Medal is presented “in recognition of notably distinguished service in the cause of Freemasonry, country or humanity.” It was first awarded to President Harry S. Truman in 1945, and has also honored such notables as General Mark Clark, Pastor Norman Vincent Peale, President Gerald R. Ford, comedian Red Skelton, and astronaut and Senator John Glenn.

In this era of austerity it was refreshing to witness the opening of a new learning center, as part of the network of Scottish Rite centers helping children overcome the effects of dyslexia.

Positive results emanating from Milwaukee and other centers inspired the members of Eau Claire to set out to do the same in their region. Their research also showed that between 4,500 and 18,000 students, within an hour’s drive of Eau Claire, were afflicted with dyslexia so a need existed.

The economic downturn proved to be a significant road block. The group was advised that any new center needed to be self-funded through local sources. They were also informed, however, that if a center could demonstrate financial viability it would be allowed to affiliate and receive non-financial support from the corporation.

Three years ago the Eau Claire planning committee was approached by an attorney who informed them that his client wanted to see a local center created and was willing to bequeath a generous sum for that purpose. With finances no longer the main issue the center opened this fall.

To air some of the differing voices of Freemasonry, new features are being introduced on the Northern Masonic Jurisdiction’s website: ScottishRiteOnline.org. A page called “Public Square” highlights the thoughts and opinions of 32° Masons. One columnist that we hope will be a regular contributor is a mysterious writer simply known as “Brother Dogood.” Those of you well versed in American history might recognize the name as being very similar to that of “Silence Dogood.” That 18th century writer, by all appearances, was a widow who offered columns with regularity to the New England Courant, a newspaper edited by James Franklin. Although unknown even to James, the real person behind the pseudonym was none other than Bro. Benjamin Franklin. Who knows? Maybe this modern Dogood is a distant relative. In any case Bro. Dogood plans on commenting on the conditions, issues, and problems of Freemasonry today and any other thoughts that cross his mind – or maybe, in an ironic twist of history, HER mind. In Bro. Dogood’s words the occasional columns “. . . will try to light a small candle to help reveal some of these impediments so that, once illuminated, we can step over them.”