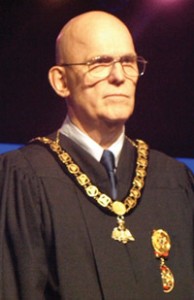 For only the second time in the nearly two-century history of the Northern Masonic Jurisdiction an Honorary Sovereign Grand Commander was named.

In the February issue of The Northern Light it was announced that the magazine can now be downloaded to your favorite electronic device. This option was made available when the staff heard from some of the readers asking for this convenience. In April, the first official request to be removed from the hardcopy subscription list was received. Bro Michael Herr from the Valley of Springfield, IL, made the request, not because he was displeased with the content. Rather, he said, he was “going green.” He now reads the magazine electronically and doesn’t want to waste the paper. All issues of The Northern Light, since 1970, can also be downloaded from ScottishRiteOnline.org.

Rest assured that The Northern Light will still be available in its original paper form for many years to come.

This year, as floods ravaged communities along the Ohio and Mississippi Rivers and tornadoes struck other parts of the country, the Scottish Rite Masons showed what it means to belong to this organization.

They stepped up and helped their Brothers get through some pretty tough times. Through the Almoners Fund financial assistance was offered to those Masons who were hit with the floods in Southern Illinois, regardless of Masonic affiliation.

Additionally, a grant was made to the Grand Lodge of Missouri so that Masons who were victims of the killer tornado that hit Joplin could be helped.

One Brother, from Cairo, IL, wrote to express his “most sincere gratitude and thanks to [the members] for the unfettered generosity to my family and me in our recovery from the catastrophic flood of 2011. Words are simply deficient to express our appreciation to anyone and everyone involved in the decision to assist us in one of our darkest hours. It is in times like these that we pause to comprehend the gravity of our Brotherhood.”

Another writes, ”Thank you so much for coming to my rescue. I have used the money to help rebuild my home and my life. After both the flood and the fire it was one of the lowest days of my life until you all arrived. My spirits went from the lowest to the highest in a matter of hours.”

Ralph Waldo Emerson said, “When it is dark enough, you can see the stars.” This past year’s natural disasters brought out the best in Scottish Rite Freemasonry, and its stars shone brightly.

Members reached out and helped their Brothers and displayed, in a practical and honest manner, the true meaning of fraternity.