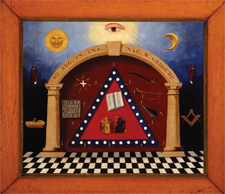 The Scottish Rite Masonic Museum and Library, located on the grounds of the Northern Masonic Jurisdiction Supreme Council headquarters, is sponsoring its second biannual symposium, titled “Perspectives on American Freemasonry and Fraternalism,” to be held April 28, at the museum in Lexington, Mass.

Plans for the event include the presentation of the newest research on American fraternal groups from the past through the present day.

By 1900, over 250 American fraternal groups existed, numbering six million members. The study of their activities and influence in the United States, past and present, offers the potential for new interpretations of American society and culture.

Each presentation will run approximately 30 minutes and will allow for audience questions and feedback.

In December the dyslexia center in Newtonville, MA, moved to a new home. Its history, however, goes back nearly two decades, and its original opening back then marked the beginning of the jurisdiction-wide program.

In a written statement prepared for the ceremony, Bro. William G. Ziemer, director of operations for the centers, gave credit to the board of governors and commended its members’ foresight. The first foray into the field in the north was at Marquette, MI, where a summer program was instituted. In 1993, the Massachusetts Scottish Rite Foundation was set up by the Massachusetts Council of Deliberation, through contributions from its members. That funded the original center in Newtonville.

From the program’s humble beginnings at Newtonville 18 years ago, the Children’s Dyslexia Centers have served the needs of more than 9,000 children, and, judging by the opening of the new home of the inaugural center, will continue to be committed to helping children overcome the issues associated with dyslexia for many years to come.

On August 5, 1813, the Northern Masonic Jurisdiction was born, as Daniel D. Tompkins was installed as the first Sovereign Grand Commander. Tompkins, by the way, was governor of New York at the time, and he would be elected as the next vice president of the United States. In about a year and a half the 200th anniversary of that event will be reached. The marking of that anniversary, with its theme “200 Years of Brotherhood” begins August 5, and extends to the end of 2013. Plans are being finalized and will be announced soon.