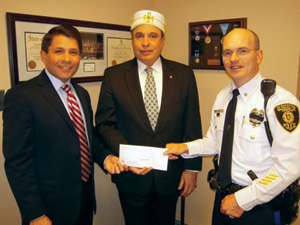 In December Ill. William H. Berman, 33°, (center), representing the Valley of Southern New Jersey, presented a contribution of $5,000 to Gloucester Township Mayor and member of Rising Sun Lodge No. 15, the Honorable David R. Mayer (left) and Gloucester Township Police Chief Harry Earle (right) toward the purchase and training of a new K-9 dog. The Brethren of the Valley of Southern New Jersey were deeply moved to learn of the cruel demise of police dog “Schultze” at the hands of a robbery suspect, and at the behest of Ill. Bros. Berman and Emil P. Busko, his fellow presiding officers and members of the Charitable Committee authorized the funding, providing yet another example of the compassion and community commitment of Scottish Rite Masons.

Each of the curators at the Scottish Rite Masonic Museum and Library, located on the grounds of Supreme Council headquarters in Lexington, MA, has a favorite item – one that calls out for one reason or another. That became the theme for the museum’s latest exhibition. Called “Favorites from the Collection,” it features an eclectic array of items, each with a caption explaining the object and telling the viewer the inspiration for its selection for the exhibition. Among the items on display is a bowl by famed glassmaker, Louis C. Tiffany, donated to the museum in 1977. Another is a quilt from the 1820s with a Masonic handkerchief stitched to its center. One of the most unusual pieces is a bucking billy goat from 1900–25. The exhibition will be at the museum until the spring of 2012.

This year many of our learning centers will take on a new name, replacing the official title “The 32˚ Masonic Learning Centers for Children, Inc.”

Following an examination it was determined that the original title has no reference to what the children are learning at the center. Additionally, the current name suggests, in the words of the committee, that “only Masons’ children are involved.”

Research also showed a desire for regional identification, while a significant group felt it important to identify a major benefactor.

A qualifying line might be appropriate, spelling out the major supporter. In that case it would read, “Jonesville Children’s Dyslexia Center, A Scottish Rite Charity.”

As 15 to 20 percent of all Americans suffer to some degree from the effects of dyslexia, its incorporation into the name may help those that wish to support the efforts of the Scottish Rite to know the mission of the centers.