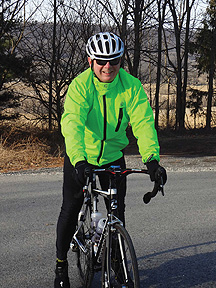 From May 19 to June 29, Ill. Larry Emigh, 33°, of Boalsburg, PA, rode 3,415 miles across the United States to raise funds for the Children’s Dyslexia Center in State College, PA. To prepare for the journey Bro. Emigh worked out six days a week for two years. The 70-year-old stayed connected to his followers with a Facebook page and Twitter account. He also produced a short promotional segment seen online (youtube.com/watch?v=A0dkfh8LOaA).

All of these outlets helped Larry share information about the cause near and dear to his heart and allowed him to share his experiences as he traveled across the country. He was also able to reach out to local supporters along the way.

Larry departed State College on May 9, traveling to the start of his journey in Los Angeles. The ride ended on Revere Beach, just north of Boston about seven weeks later.

On Saturday, March 17, the Valley of Chicago dedicated its new home in Bloomingdale, IL. The 60,000 square foot structure, known as the Scottish Rite Cathedral, located at the corner of Lake Street and Medinah Road, includes a library, museum, a lodge room, a formal dining room, and a state of the art theater seating 300.

The opening exhibition in the museum featured, among other things, a history of the property, including ancient maps of the area, as well as photographs from a small amusement park – Adventure Land – that once sat on the parcel.

The opening ceremonies included a black tie reception and dinner, building tours, and an official lodge dedication conducted by Ill. Terry L. Seward, 33°, Grand Master of the State of Illinois.

Presentation and remarks were also made by Sovereign Grand Commander John Wm. McNaughton. The occasion was the first building dedication for the Valley in 112 years.

The Scottish Rite Masonic Museum and Library, located on the grounds of Supreme Council headquarters, sponsored its second biannual symposium, titled “Perspectives on American Freemasonry and Fraternalism.” It was held Saturday, April 28, at the museum in Lexington.

Presentations included some of the latest research on American fraternal groups from the past through the present day. By 1900, over 250 American fraternal groups existed, numbering six million members. The study of their activities and influence in the United States, past and present, offers the potential for new interpretations of American society and culture. Diverse perspectives on this topic covered history, material and visual culture, anthropology, sociology, literary studies and criticism, gender studies, political science, African American studies, art history, economics, or any combination of disciplines.

Each presentation ran approximately 30 minutes and was followed by lively audience participation. Plans are already in the works for the third such session, planned for 2014.