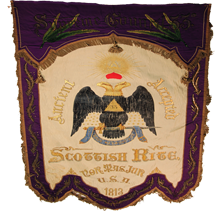 The Scottish Rite Masonic Museum and Library received a grant from the Federal Institute of Museum and Library Services to support conservation treatment for fraternal banners in its collection. The IMLS grant is particularly important to the museum because of the nature of its Masonic and fraternal collections. Many of the objects are not widely collected by other history museums.

Three fraternal banners have been singled out for treatment. All showed signs of age, as well as damage from long-term exposure to the elements and stress from gravity. The surfaces were rippled throughout, and the painted sections were worn with some loss.

The museum hopes to be a model for Masonic museums and libraries by demonstrating how to preserve Masonic history that is in danger of disappearing. With the project complete the banners are available for viewing both on site at the museum and online at: nationalheritagemuseum.org.

The Van Gorden-Williams Library and Archives acquired more than 600 manuscript letters written to Jacob Norton in the late 19th century. A furrier by trade, Norton corresponded with many of the well-known Masons of his time in both America and England. The collection is rich with Masonic connections to the library’s existing permanent collection.

Among the major correspondents are Terry Enoch Carson, Josiah Hayden Drummond, Theodore S. Parvin, and Henry P. H. Bromwell. Many of the letters contain the raging debates of the 1870-90 era.

Researchers can look forward to accessing them by 2013.

Albert Pike is a name known throughout Scottish Rite. He is also closely associated with the Southern Jurisdiction, but many do not realize he was actually born in Boston. Bro. J. R. Roach, who works in the offices of the Northern Masonic Jurisdiction, recently conducted a quest to find his birthplace.
Bro. Roach says, “We learned from Walter Lee Brown’s 1997 book, A Life of Albert Pike, that Pike’s birth was not recorded in Boston, and the only address Pike had ever given for his birthplace was on Green St.” However, the Boston Directory of 1809, published three months prior to his birth, placed the family on Gouch Lane, which ended at Green Street. Brown further states that the Pike residence was “almost in the shadow of the lofty tower of the beautiful West End Church,” which was built in 1806 and still stands on Cambridge St. near Government Center, now called the Old West End Church.
In 1809, Green Street ran between what are now the southern ends of Staniford and New Chardon Streets. Gouch Lane ran from the 1809 location of Green Street north-northeast. Since Gouch Lane ended at Green Street, it could explain why Albert may have thought that his family lived on Green. The family home could have stood on the corner of Gouch and Green. Furthermore, this places the former location of the family home in the shadow of the Old West End Church.
There are no streets there now. Currently standing on the entire city block is the headquarters of Commonwealth of Massachusetts Mental Health Department, with an address of 25 Staniford Street, Boston.