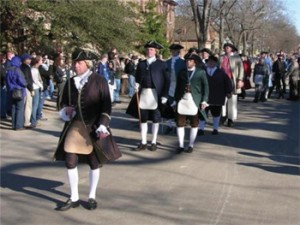 Photo: The Tyler with his sword leads the St. John’s Day procession of Williamsburg Lodge No. 6.

Imagine finding yourself in a different time period in America. It is a common occurrence here in Williamsburg, Virginia. A walk down Duke of Gloucester Street can magically take you from a 21st-century shopping trip and thrust you into the midst of the turmoil and drama in the capital of America’s largest colony in the late 18th century, all within a single block. The talk of revolution and independence is on everyone’s lips, and the townspeople are eager to share their life experiences with you. However, you soon realize they can only communicate with you from their 18th-century perspective and know nothing of our current events and the things we take for granted in going about our daily lives. This can prove challenging and really test your knowledge of American history. You begin to search for something you have in common; for a way to establish rapport.

If you are a Freemason visiting Colonial Williamsburg, you are in luck! The language of America’s independence is filled with the core principles and tenets of our gentle craft. The setting for the old town is the summer of 1776. As a Freemason you not only understand the importance of concepts like equality of mankind and personal integrity that are being discussed, but also realize you are fraternally linked with some of the most important architects in the founding of our country. While our fraternity’s beginning was somewhat sporadic, by the 1760s Freemasonry was well established in Tidewater Virginia with Lodges in Norfolk, Hampton, Gloucester, and Williamsburg, to mention only a few.

Like their Brothers in England, the early members of Williamsburg Lodge held their meetings in taverns. While there is evidence in the Virginia Gazette, the town’s newspaper, or in the minutes of Fredericksburg Lodge No. 4 that there had been an active lodge in Williamsburg prior to 1750, it went dark. The oldest surviving records of Williamsburg Lodge date to 1762 and point out that it was meeting in the Crown Tavern on Duke of Gloucester Street. The membership began construction of a two story wood frame lodge building on the corner of Francis and Queen Streets in 1773. By 1776 the members were enjoying the use of the new “Mason’s Hall,” as it was known. The old building stood until the beginning of the 20th century, but was in deplorable condition by that time and was torn down by about 1910. Our “new” Masonic Temple was built in the early 1930s as part of the reconstruction of Colonial Williamsburg. Mementos of the old hall remain. The brethren used the hand made bricks from the foundation of the old building as the fireplace surround in the new fellowship hall, and there are architectural details from the old mantel as well as a door from the building on display.

The lodge also has another very important element from that era in its possession: the very lavish and highly carved master’s chair. This chair was presented to the lodge by Virginia’s Royal Governor during the 1760s, Norborne Berkeley, Baron de Botetourt, also a Mason. It is on long term loan and on display at the Dewitt Wallace Decorative Arts Museum on Francis Street. The chair is brought back into the Lodge for the annual officer installation ceremony. As the 190th known Master of Williamsburg Lodge, I consider having occupied that chair as one of my most memorable Masonic events.

As Freemasons we are aware that a Lodge is made up of a certain number of Masons, so it is important to make note of the membership during the later part of the 18th century. The list comprises an amazing cross section of the census of Williamsburg during that period. Wor. M. Kent Brinkley points out in his history of the lodge that the membership included wealthy men from the most prominent families, educators, physicians, judges, politicians, and tradesmen; some names are familiar and some not. The list included: Provincial Grand Master (1774) Peyton Randolph, attorney, Speaker of the House of Burgesses, and Chairman of the first Continental Congress; Rev. James Madison, president of the College of William and Mary; John Blair, Jr., attorney; Dr. James McClurg, physician; Peter Pelham, organist/choir master of Burton Parish Church; Benjamin Bucktrout, cabinet maker; William Wadill, silversmith and engraver; Edmond Randolph, attorney, Governor of Virginia, and Attorney General of the United States under President George Washington; and James Monroe, Governor of Virginia, U.S. Senator, Secretary of War, and President of the United States.

Several of our current members are historical interpreters for Colonial Williamsburg and help to keep the memory of many of the famous Masons of the 18th century alive today. Our present Worshipful Master, Ronald Scott Carnegie, is nationally recognized for his portrayal of George Washington. Our Senior Warden, David Arehart, interprets the character of Peyton Randolph, and our Tyler, Michael Noftsger, interprets William Wadill and is himself a master founder. As a visitor you will encounter these brethren in the Colonial City and they are more than happy to interact with you
Williamsburg Lodge No. 6 helps to keep another 18th century tradition alive by celebrating the two feast days of the Saints John: John the Baptist on June 24th and John the Evangelist on December 27th. The officers and members of the Lodge join with interpreters of Colonial Williamsburg for a solemn procession, complete with fife and drum, from the temple, down Duke of Gloucester Street to Bruton Parish Church. There a Masonic service with an 18th-century homely is reenacted. The assembly the processes back to the temple where an open house for the visitors is held. All Master Masons are invited to join in the procession and we have many visitors from out of town participating. Our annual officer installation ceremony is held the evening of St. John the Evangelist Day.

In the 18th century it was common for the lodge, in connection with the festivities associated with St. John the Evangelist’s Day, to host a dinner and “Ball for the entertainment for the ladies” at Chritiana Campbell’s Tavern; now remembered as George Washington’s favorite tavern Her husband was a Mason and one of Washington’s friends. Mrs. Campbell went into the tavern business following his death and the Masons were her regular customers. Her tavern, located on Waller Street, continues to be active today and is still a favorite of local as well as visiting Masons.

In May 1777, a convention was held at Masons’ Hall in Williamsburg to discuss the need to centralize authority for Freemasonry in Virginia. At that time, lodges in Virginia held charters from various Grand Lodges of England, Ireland, and Scotland. There was a general agreement that there needed to be a Grand Master in Virginia. In June of 1778, representatives of the Virginia Lodges elected John Blair, Jr., Past Master of Williamsburg Lodge No. 6, the first Grand Master of Masons in Virginia. The position had been offered to George Washington and a Past Master of Botetourt Lodge No. 3, Warner Lewis, both of whom declined.

Most Worshipful Brother Blair was installed on October 13, 1778, at a meeting of the various lodges. Significantly the Grand Lodge of Virginia was created on that day with all lodges present recognizing it as the central authority for Freemasonry in Virginia. This was the first grand lodge constituted in North America. Williamsburg Lodge has a long history of providing Masonic leadership at the grand lodge level with at least ten men with ties to Williamsburg Lodge who have served as Grand Masters of Masons in Virginia. The latest member of this group was Most Worshipful William Earl Rorer, Jr., Grand Master in 2010.