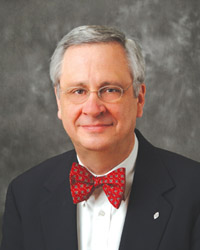 The Grand Commander’s office receives a lot of mail—all kinds of mail—from what is now commonly referred to a “snail mail,” to email, text messages, tweets, SMS, and other such forms of instant communication. Some of the most interesting is the snail mail. You remember those days of yore, when someone wrote (not typed) their words on a piece of paper, found an envelope with a stamp, sealed it, and dropped it in a post office box? Remember those big blue things on the street corner next to the drugstore? Those are the ones.

Anyhow, a fair amount of hand-written, hand-addressed, and hand-mailed letters still find their way to me nearly every day. Most often, they are written in a shaky cursive handwriting, indicative of someone for whom the years have made their mark. Can I share two letters that I received on the same day in late January of this year? Their messages were memorable, each in their own way.

The first is from a widow of a brother Mason recently deceased. She’s obviously in great pain now facing her days without her life’s companion with her. She writes (asterisks are substituted for actual names):

To Whom It May Concern:

* * * * * died on May 20, 2010. Please do NOT send any more items from the Scottish Rite or anything else from the Masons. At this time I have a bitter feeling for anything Masonic. I notified the Blue Lodge & Scottish Rite both that he was ill and in the V.A. nursing home.

NO ONE EVER CAME TO SEE HIM while he was alive. Also, I was not contacted even after they knew he died. DO NOT TELL ME YOU ARE ABOUT BROTHERHOOD. As far as I’m concerned, if you are not a click, you are nothing.

* * * * * happened to be a gentle man who helped many people but did not brag about it. All I and he ever heard at the meetings was the big shots bragging about what they had done. Yes, I’m very bitter and I want nothing Masonic coming to my home again.

Looks like we’ve got a little more work to do here, folks. Seems as though this lady got the idea that we were about brotherhood and that taking care of one another and having fraternal concern and caring were tops on our agenda. I mean, that’s what we talk about in our degree ceremonies and obligations isn’t it? I wonder how she got that idea? Maybe it was the pride she saw in her husband’s eyes on the night of his raising as a Master Mason when he came home with a fresh, clean lambskin or white leather apron. Or the honor he felt in wearing the square and compasses on his lapel or the many meetings that he attended over the years. Yet, when the years left him no longer able to attend, where were we? On one of the hardest days of her life, where were the brethren? May God forbid that she got a dues notice along with the funeral bills. But it happens, you know.

Here’s another letter, this one from a brother in the Scottish Rite handwritten on a piece of letterhead from a motel. You remember when you could actually find stuff like that in the drawer in your hotel room? Here’s his message, written very simply and in response to raising funds to maintain the historic House of the Temple in Washington:

Here is the gift of $50.00 that I was to use to take my wife out to dinner for our 38th wedding anniversary. We want you to use it for the Temple repair. Sorry, all we can afford.

As I said, we get lots of mail around here. Both of the above came on the same day. The question is thus presented: How do you respond to items like this? The last one was the easiest. I made sure this good brother and his wife had the opportunity to celebrate their thirty-eight years together in due form with our best wishes for many more happy occasions. And the other letter? Other than offering our most profound apologies, the best action we can take is to try to keep things like this from happening again, both in our Blue Lodges and local Scottish Rite Valleys. Let’s look out for one another and our families. Let’s be what we are called to be each and every day: brothers—true brothers—who meet on the level, act by the plumb, and part upon the square.

The mail will surely come tomorrow. I’ll be here to read it.