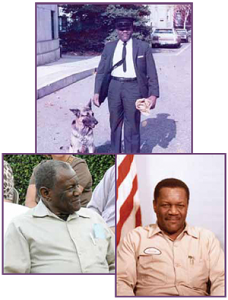 September 17, 1962, was a bright sunny day in Washington, D.C. The House of the Temple was magnificent, bathed in the early morning light of a crisp fall day. With the morning sun highlighting their features, the two massive sphinxes stood as sentinels to the main entrance where the threshold proclaimed:

THE TEMPLE OF THE SUPREME COUNCIL OF THE THIRTY-THIRD AND / LAST DEGREE OF THE ANCIENT AND ACCEPTED SCOTTISH RITE OF / FREEMASONRY FOR THE SOUTHERN JURISDICTION OF THE UNITED STATES / ERECTED TO GOD AND DEDICATED TO THE SERVICE OF HUMANITY. SALVE FRATER.

On that fall morning, a young African American, not yet thirty years old, ascended those steps and crossed the impressive threshold to report for work as the newest employee of the Supreme Council. His name was Frank Simpkins. Fifty years later, on September 17, 2012, Frank will retire with the thanks of the Supreme Council for a job well done.

Frank moved to Washington from his beloved South Carolina and, as he tells it, never got around to going home. Working at the historic Willard Hotel for six years before joining the staff of the Supreme Council, Frank immediately set about serving as chauffeur to the Sovereign Grand Commander, then Ill. Luther A. Smith. Thereafter, he worked with Sovereign Grand Commanders Henry C. Clausen, C. Fred Kleinknecht, and me. Marking the tenure of four Sovereign Grand Commanders over a span of half a century, Frank has stayed the course. Think of the changes and adjustments he has seen over these five decades as the Scottish Rite has endured and adapted to the times. As Frank notes, he has seen many changes over the years and even a few from day to day.

One of my pleasures is to sit with Frank listening as he recounts the stories of the glory years. Each of Frank’s reminiscences could begin with, “Once upon a time.…” The early years surrounding his employment were a time of change in America. Air travel was not as prevalent as today; auto and train travel were still a hallmark of American life. Gasoline was 31¢ per gallon, and Grand Commander Smith still travelled widely by limousine. Setting out cross-country over the highways and byways and driving a limousine as the nation struggled to identify itself in the civil rights era was not an easy assignment. Yet Frank remained true to his charge. Frank recounts the experience of a trip to New York when the limousine was stolen, and he and the Grand Commander were left high and dry! For many years, the Supreme Council actually had a serviceable gasoline pump on the premises, which remains to this day. The dusty old pump, now inoperable for years, shows gasoline priced at 66¢ per gallon. Frank still keeps it locked—“in case we need it.”

The times were a-changing, so they say. In 1969, in comes Grand Commander Henry Clausen, a native of California. Joining Grand Commander Clausen in occupying the executive offices are two of the loves of his life, German shepherds Heidi and Gretchen. Guess who became one of the primary caretakers? The stories of those days! Frank recounts many days driving the Grand Commander with the dogs sitting upright on the seat next to the Grand Commander or the night of distress when the dogs missed their plane connection flying back to D.C. from California.

When Frank initially interviewed for employment with the Council in 1962, he was actually given a driving test by one of the staff members, a young assistant secretary by the name of C. Fred Kleinknecht. Never known to be one to take a long time to make a decision, Fred’s judgment on Frank was immediate. Just a few blocks down the street and a quick pass through Rock Creek Park and Fred was satisfied—Frank was in.

One of the hallmarks of the Kleinknecht years was Fred’s longevity of service to the Supreme Council—he served fifty-six years in a variety of positions! In 1985, Mr. K was elected Grand Commander and served eighteen years. Frank stayed with him and saw many changes in Supreme Council operations during those times. Gone was the clatter of typewriters replaced with the clicking of computer keyboards. The rise of the Internet and electronic communications replaced a massive mailing operation. Computer databases were in, member index cards were out. New faces replaced old, but the mission remained true—providing a positive Scottish Rite membership to all qualified Freemasons.
In 2003, yet another Grand Commander takes office—this one a lawyer of sorts from Louisiana. This would have been a good time for Frank to take his leave and get out while the getting was good. But it didn’t happen that way. Frank served just as faithfully and with professional competence as he did for those who preceded me. He has been my good fortune, and I am honored to have been one of those upon whom Frank has attended. It is my honor to call him my friend. Beyond recall are those occasions when I have returned to Washington bone tired and weary from yet another travel experience with all of its attendant frustration only to find Frank waiting in the terminal with a word of good cheer and a helping hand. Thank you, thank you, thank you!

Make no mistake. Frank’s influence goes far beyond driving an automobile at the whim of a Grand Commander. He continues as an ambassador of good will for this Supreme Council. Over fifty years it would be impossible to name the many individuals from all walks of life that Frank has greeted upon the behalf of this Council and conveyed around Washington D.C., to airports, train stations, and the like in all kinds of weather and at all times of day and night. Always done in a spirit of good cheer and hospitality, Frank’s positive attitude and countenance are well known. Each person is made to feel special and warmly greeted with a firm handshake and a ready smile. And each comes away somehow feeling he has been conveyed by the best we have to offer. And so they were.

To Frank, I say, “Thanks for the lift. It really was a first-class ride.”