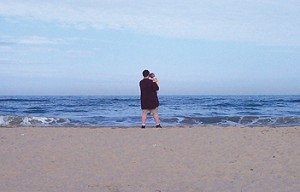 Today my son came home and told me, in breathless fashion, about his great reading accomplishment at RiteCare. “I got all the pictures … and I played the computer with Ms. Lisa!” “Great job!” I said. “Thanks, Dad!” Joey said, and waltzed away into the living room followed by his 19-month old sister, Sia, to watch Sesame Street before dinner. It’s a pastime they both share and love, not so much for the television and the bright and colorful characters, but for the time they have together.

When Joey was born, he had massive internal complications requiring extensive surgeries and life-or-death decisions. His mother and I were numb from the events that unfolded in such a whirlwind fashion. It would be 13 painful surgeries and over 27 hospitalizations later that Joey would see the last of a surgeon’s scalpel. When something like this happens to you as a parent, you think many things about the nature of life and your place in it. You think how unfair things are and how it could possibly be that such a beautiful and wonderful child, just like my Joey, could have inflicted upon him such strife and pain. Some children don’t last through it, and indeed many families don’t either.

Joey also has autism. He has brain abnormalities leading to a host of neurological disorders. One of the worst symptoms of autism is the inability for the child to form coherent or even word-like noises. Imagine walking up to your child when you get home, having them not look you in the eye, and upon saying something as simple as, “I love you,” they don’t do anything … they just stand there. This is what nearly every parent of an autistic child has experienced. Many parents care little whether their child ever learns to say any other sentence except that one. They yearn for a day when their mute child walks up to them, breaks free of the confines of this terrible condition and says, “I love you!” Were the planet to explode at that moment wiping out all life on earth, that parent and thousands like them around the world would die happy because their child finally talked.

What do we, as people, do to encourage our children? We send them to school, we teach them all we’ve come to know over the course of our lifetimes, we pass on the knowledge of our own parents as it was passed on to us. We do this in the hopes of giving them a better understanding of the world around them so that they can make the best decisions for themselves and lead a life free of constraint. How then, do we cope with a child who has all of this presented to them, but is constrained by the internal workings of a disease so mysterious that Agatha Christie and a roomful of detectives could not deduce the answer to it? Our understanding of autism is in its infancy. Great strides have been made and continue to be made, but we’ve so much work to do.

When I was introduced to the Scottish Rite, it was not because I was a Freemason. I was making a routine sales call at the Baltimore temple to check on their security. I was shown through the building on a tour and was then shown the Hilgenberg RiteCare Childhood Speech and Language Center. I didn’t know at the time, but my unborn son would be sitting in one of those very rooms learning the intricacies of speech. I couldn’t see then, that through the two-way glass I would ball my fists tightly to hold back tears of joy as my nearly mute son would speak, not only his first full sentences, but grow to love books and the language in them. Every small step for my son is the equivalent of climbing Mt. Everest. When we drive into the parking lot at RiteCare, he runs to the door of the Speech Pathology Center and when we leave it to go home, he sulks back to the car.

My wife and I worked for years on sign language with Joey. There was some success. His motor skills were low, but he could convey the sign in a general manner. I was putting him to bed one night, and he suddenly locked eyes with me, reached up, and made the sign for “I Love You!” I quickly signed it right back to him and he laughed in his high pitched voice. I had to turn away, I was so choked up.

It was after he was at RiteCare that I heard him say that for the first time with his own voice. I actually have it recorded on a birthday card. On it you can hear my wife helping him with the words, but he says, “I … love … you … Daddy!” Where would we be without everyone at RiteCare? Where would the children who visit there be if the parents and the caregivers and teachers and therapists there looked at the world with a closed view of the possibility for a child to learn and grown around what they are born with?

We had no clue about the autism or other neurological and biological malformations associated with Joey when he was born. Maria and I were in an almost static emotional state for the nearly 10 hours of surgery until the surgeon walked up to us, looking exhausted, and said, “He did not die! He may still, but he is fighting as hard as his biology is letting him. I know that you have a lot of questions right now for me. I’ve been awake for the last 42 hours now and I need some sleep. I will be back in the morning…. His numbers are pointing to recovery. What a strong kid!”

I can recall his exact tone of voice, the people in the room with us, the way they all looked, the light levels, the smells of cleaning products, and the hum of the lights overhead. I recall this in amazing detail.

When people tell me how strong Maria and I must be for going through all of this I emotionally shake this off and regard it as lip service. It’s not meant as offensive to their caring comments. It’s shrugged off because I’m not the one that fought. I’m not the one that endured 13 surgeries and 27 hospitalizations and countless months of rehab and recovery. I’m not the one that had two close calls with death. The truth of the situation to me is clear, if Joey fights this hard and stays positive about every aspect of his life in the midst of that much opposition, how can I not fight my hardest?

My son has said, “Daddy, I love you!” because RiteCare gave him another tool to fight with. Joey is the one in the ring for his fight in his life; I’m proud to be his corner-man!