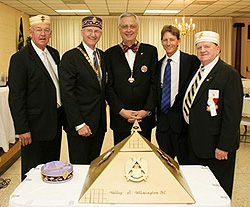 On October 17, 2009, the Valley of Wilmington, North Carolina, celebrated the centennial anniversary of the “Johnston Blakeley Lodge of Perfection.” A bagpiper led in the dignitaries, including SGC Ronald A. Seale, 33°, and Ill. William B. Brunk, 33°, SGIG in N.C. After a prime rib dinner served by the Knights of St. Andrew, the celebration began.

Dr. Brunk pointed out that although religious factions in the world seem to be at war with one another, Masons transcend religious differences and come together as a unified body working for the common good of mankind. He referred to Dan Brown’s new novel, The Lost Symbol, and emphasized the last word in the book: Hope. SGC Seale complimented the organizers for an outstanding event and presented the Venerable Master, Joe A. Apke, 32°, KCCH, with his Sovereign Grand Commander cap to be displayed or placed in the pyramid-shaped time capsule created for the centennial. Ross Everett, son of Ill. A. C. Everett, 33°, General Secretary for Wilmington designed, built, and donated the gold-painted stainless steel time capsule. The very memorable evening was closed with a “Toast to the Future” given by Ill. James E. Vann, 33°.

The Valley of Wilmington began in 1909 when a team from Charlotte Lodge of Perfection No. 1 arrived by train to confer the Scottish Rite Degrees on candidates from Wilmington. After receiving the degrees, the new Masters of the Royal Secret elected and installed officers and agreed to meet on the fourth Wednesday of each month at 8:00 p.m. The initiation fee was set at $25 and annual dues at $3. Wilmington residents received their degrees at night during the week, and out-of-town candidates received their degrees on Saturdays with the Lodge paying their round-trip train fare.

Some fifty years ago on the first morning of reunions, Ill. Charles B. Newcomb, 33°, Grand Cross, would sit on the top step of the stage. He addressed the candidates and gave an overview of what they were about to experience. The last thing he would say was, “We will, over the next three days, fill whatever container you bring, be it a tank, a wagon, or a cup.” The Valley of Wilmington continues to fill the containers brought by their new members.