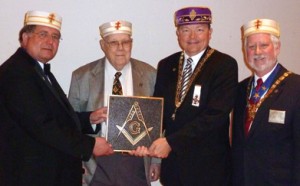 At their May 2011 stated meeting, the Valley of Roanoke, Orient of Virginia, celebrated the 100th Anniversary of the chartering of its Lodge of Perfection on April 1, 1911. Ill. James Dean Cole, 33° SGIG in Virginia, PGM, and MW John Mason Chambliss, Jr., 33°, Grand Master of Masons in Virginia, were the speakers at this event. Other dignitaries present were MW James Milton Scearce, 33°, PGM, RW Louis “Kerry” Campbell, 33°, Personal Representative to the SGIG and Grand Senior Warden, RW Paul David Sleeper, KCCH, Grand Junior Warden, RW Arthur Lee Pendleton, 33°, and DDGM.

The Valley of Roanoke’s Venerable Master, Bro. Warren W. Schmid, KCCH, was instrumental in planning and implementing this event to showcase 100 years of Scottish Rite in our Valley. The evening began with the brethren attending the May stated meeting and then moving next door to the Kazim Shrine Temple to join with wives, friends, and family for a wonderful meal and fellowship.

Ill. George Everett Dewese, 33°, presented a bronze square and compasses plaque to the Valley in recognition of the centennial of Scottish Rite Masonry in Southwest Virginia. The bronze plaque is a duplicate of one that Brother Dewese had designed and cast for his home and for the Supreme Council.

The Valley of Roanoke is looking forward to its second 100 years being even more successful than its first!