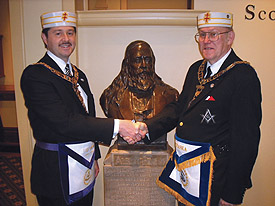 The Valley of Omaha encompasses parts of eastern Nebraska and western Iowa and has the distinction of having among its membership the serving Grand Masters of two Masonic jurisdictions—Iowa and Nebraska.

Ill. Hummel and Parsons are part of the Omaha Scottish Rite tradition of leadership and service.