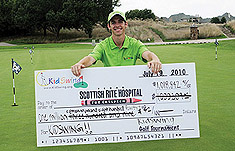 For more than eight years, 18-year-old Ben Sater received treatment, including surgery, for a condition called trigger finger at the Charles E. Seay, Jr. Hand Center at Texas Scottish Rite Hospital for Children (TSRHC) in Dallas, Texas. Although the only visual reminders of his treatment are four tiny scars on the inside of his hands, Ben’s experience at TSRHC made a permanent impression on his life. When Ben’s mother told him that TSRHC does not charge patient families for medical care, he decided to use his love for golf to express his gratitude to the hospital by organizing KidSwing, the first children’s golf tournament organized by a patient to benefit TSRHC.

The inaugural tournament was a huge success. A total of 20 teams played in the best-ball scramble on June 17, 2003, and raised more than $20,000 for TSRHC. There is no entry fee, but every child who entered is encouraged to raise $100 for TSRHC by asking their friends and family to sponsor them.

Since that first tournament, KidSwing has been so successful that a second tournament was added in 2008 in McKinney, Texas. Ben set a goal to raise one million dollars before his high school graduation. This year, Ben and KidSwing players surpassed that goal by cumulatively raising $1,018, 842.42! Even greater has been the joy that the KidSwing players and their families feel as they learn about the exceptional care TSRHC provides children in Texas and how rewarding it is to know that all of the funds raised by KidSwing players directly benefit the hospital.

Not surprisingly, Ben’s devotion to giving back to the hospital has caught the attention of his friends, neighbors, and the media. He was honored at Major League Baseball’s All-Star game in July 2009, representing the Texas Rangers as an “All-Star Among Us.” Most recently, he was selected to represent the state of Texas at the Prudential Spirit of Community awards banquet in Washington D.C. While there, Ben and nine others were selected out of the group of over 100 youth as a top honoree. The Prudential Spirit of Community Awards is a nationwide program honoring young people for outstanding acts of volunteerism. Ben feels honored, but the greatest reward of all is knowing that his hard work will help TSRHC patients. KidSwing’s success proves that one person, regardless of age, with generosity and vision, can make a huge difference in the lives of the children.
We applaud all of the KidSwing players and their families for their time and devotion to helping TSRHC.