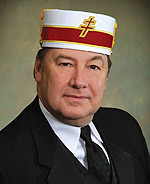 SGC Ronald A. Seale has appointed Roger Dale Barnett, 33°, as Deputy of the Supreme Council in the Orient of Kentucky. Ill. Barnett was born January 20, 1958, and educated in the public schools of Kentucky. He has been in the graphic design and print industries all of his life, at one point being co-owner of a printing company. He and his wife, Alice, are active in church activities.

Ill. Barnett became a 32° Master of the Royal Secret in 1987, received the rank and decoration of a Knight Commander of the Court of Honour in 2001, and was coroneted a 33° Inspector General Honorary in 2005. He served as the Personal Representative of the Valley of Louisville, 2006–2009. Bro. Roger is currently editor of the Valley’s Communicator newsletter and the Grand Lodge of Kentucky’s Masonic Home Journal, America’s oldest Masonic publication. Ill. Barnett is a member of the Eastern Star, York Rite, Kosair Shriners, and Royal Order of Scotland.