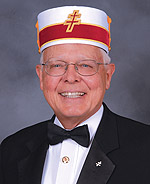 SGC Ronald A. Seale has appointed Marlin Lee Mills, 33°, as Deputy of the Supreme Council in the Orient of Maryland. Ill. Mills was born on August 30, 1948, studied at the Universities of Virginia, Baltimore, and Delaware, has a double Associate’s Degree from Harford Community College, and is a graduate of the FBI National Academy. He served in the US Army, 1969–1971, and then was employed as a Deputy/Sheriff from 1971–1996 when he retired as a Captain and Bureau Commander. Bro. Marlin and Brenda, his wife of 40 years, have one son, Jason (a member of Esdraelon Lodge No. 176 and the Baltimore Scottish Rite) and two grandsons, Tyler and Dylan.

Bro. Mills became a Mason in 1983 in Esdraelon Lodge No. 176, Cardiff, Maryland, and served as Master in 1999, 2000, and 2003. He served as Grand Inspector for Mt. Ararat Lodge No. 44 for six years and was appointed a Grand Inspector-at-Large in 2006. He is Past Sr. Grand Steward of the Grand Lodge of Maryland, and has served on several grand lodge committees and the Board of Trustees for the Maryland Masonic Homes.

In 1983 he became a 32° Master of the Royal Secret in Baltimore and served as Venerable Master in 2008. He received the rank and decoration of a Knight Commander of the Court of Honor in 2003 and was coroneted a 33° Inspector General Honorary in 2005. He has served the Scottish Rite as past president of the Conowingo Scottish Rite Club, as a Diplomat to Esdraelon Lodge, and as Assistant Personal Representative.

Ill. Mills has been active in many other Masonic bodies. He belongs to the York Rite bodies of Maryland, Red Cross of Constantine, Royal Order of Scotland, WSB Club, Scottish Rite Research Society, and Free State Shield & Square Club. He served as president of the Knights of Mecca of Boumi Shriners, grand tall cedar of Har-Ce Forest, Tall Cedars of Lebanon, and associate patron Penn Mary Chapter, OES.