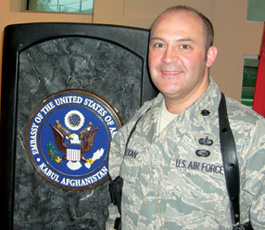 The Air Force recently selected Lt. Col. Tony L. Millican, 98th Mission Support Group deputy commander, to be the senior officer recipient of the 2010 Air Force Lance P. Sijan Award in recognition of his outstanding leadership both here and during his latest deployment to Afghanistan.

“Words can’t describe how humbling it is to be presented with an award named in honor of such a hero,” Colonel Millican said. “Capt. Lance Sijan’s life epitomized Air Force core values and his perseverance during the war in Vietnam makes him the example for all Airmen to follow.”

Bro. Millican, 32°, is a member of Davitte Lodge No. 513, Aragon, Georgia, and the Valley of Guthrie, Oklahoma. As the deputy commander of the 98th MSG, Colonel Millican oversees 577 military personnel, civilians and contractors. He runs two squadrons and is charged with sustaining the 2.9-million-acre Nevada Test and Training Range. In the past year, he led the 98th Range Wing commander’s effort to reorganize the wing in order to meet updated guidelines, and managed a $32 million program that directly supported more than 40,000 test and training sorties.

Also during his time at Nellis, Colonel Millican served as the chief of protocol for the U.S. Air Force Warfare Center. He led his team to “Best in the Air Force” recognition and earned the George Washington Protocol Award.

From March to September 2009, Colonel Millican was deployed to Kabul, Afghanistan. There, he served as unit commander for 1,200 American Soldiers, Sailors, Airmen, and Marines at four NATO sites. At one point during his deployment, Colonel Millican survived a 700 pound blast from a suicide vehicle-born improvised explosive device that exploded less than 50 yards away from his location. Immediately, and despite a head injury and hearing loss from the blast, Colonel Millican commanded post-attack operations by leading the dorm recovery team to account for more than 600 people in less than 90 minutes.