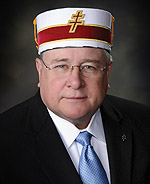 SGC Ronald A. Seale, 33°, has appointed Joseph R. Manning, Jr., 33°, as Deputy of the Supreme Council in the Orient of Oklahoma. Ill. Manning was born December 17, 1946, in Cushing, Oklahoma. He is an attorney, having received a BA in political science from Oklahoma State University and a JD from the University of Oklahoma. He was in the US Army Reserves, retiring with the rank of captain. He served in the 35th–38th Oklahoma legislatures, 1974–1982, as a member of the Governor’s Senior Staff, 1987–1989, as Mayor of Cushing, 1994–2002, Vice-Mayor, 2008—, and as Vice-Chairman of the trustees, Cushing Regional Hospital, 1995—. He is a member of the First United Methodist Church, Cushing, serving on its Pastor Parish Relations Committee, 1994–1997, and Administrative Council, 2010. He and his wife, Cindy, live in Cushing, Oklahoma.

Bro. Joe has been very active in all branches of Masonry and is a member of the Knights of the York Cross of Honor; Holy Royal Arch Knight Templar Priests, Deputy Grand Preceptor; York Rite Sovereign College of North America, Order of the Purple Cross and Grand Governor of Oklahoma; Red Cross of Constantine, Grand Sovereign; Grotto; Shriners; Tall Cedars of Lebanon; SRICF; Royal Order of Scotland; CBCS, Great Prior; Allied Masonic Degrees, Jr. Grand Warden; Knight Masons of the USA; Grand College of Rites; Order of St. Thomas of Acon; and many, many more.