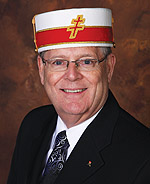 SGC Ronald A. Seale, 33°, has appointed Harold Jackson “Jack” Yost, Jr., 33°, Deputy for the Supreme Council in West Virginia. Ill. Yost was born October 12, 1945, in Steubenville, Ohio, an attended West Liberty State College, West Virginia. He served in the US Army Reserves for six years and is a colonel in the West Virginia Civil Air Patrol. He retired after 39 years as a tool and die maker with the Weirton Steel Company. He was elected to the West Virginia House of Delegates in 2002, 2004, and 2006, and to the West Virginia Senate in 2008. He is a past member of the Administrative Board of the Wellsburg United Methodist Church, and he and his wife, Kris, have three children and two grandchildren.

Bro. Jack has been extremely active in his community, serving on the Wellsburg City Council, Wellsburg Water and Sewer Board, Wellsburg Board of Zoning and Appeals, Board of Directors of Big Brothers and Big Sisters, Brooke County Public Library Expansion Project Committee, Ohio Valley Athletic Conference, American Legion, and many, many other groups.

Ill. Yost became a Mason in Bethany Lodge No. 69, West Virginia. He belongs to the York Rite bodies in Wheeling, presided over the Osiris Shriners in Wheeling, the Mid-Atlantic Shrine Association, and the Red Cross of Constantine. He became a 32° Master of the Royal Secret in 1975, received the rank and decoration of a Knight Commander of the Court of Honor in 1983, was coroneted a 33° Inspector General Honorary in 1993, and has presided over all four bodies in the Valley of Wheeling.